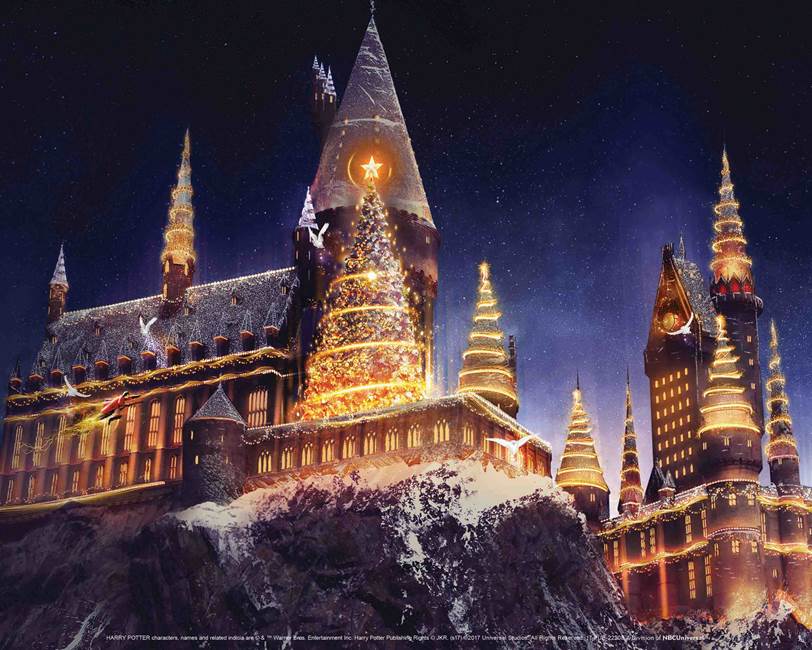 It’s the most wonderful time of the year at The Entertainment Capital of L.A. as Universal Studios Hollywood and Universal CityWalk deck the halls for a wintry calendar of festive holiday experiences and an array of delectable treats that families and friends far and wide can enjoy.

The all-new “Christmas in The Wizarding World of Harry Potter” experience will resonate throughout the immersive land this yuletide season transforming the iconic HogwartsTMcastle into a dazzling light projection spectacular, while the quaint town of Hogsmeade village shines brightly with décor uniquely themed to each of the individual storefronts. The a cappella Frog Choir, comprised of Hogwarts students and their giant throaty frogs, will perform all-new holiday themed songs.

A wide selection of all-new custom-made Christmas ornaments created especially for “The Wizarding World of Harry Potter” will also debut this season. Collectibles include a variety of decorative Hogwarts castle snow globes, Hogwarts crest and mascot ornaments representing each of the houses, as well as a collection of unique tree toppers and house pennant garland. Newly introduced holiday-themed fare and the eagerly-awaited seasonal return of hot Butterbeer will further complement the overall experience.

“Christmas in The Wizarding World of Harry Potter” will take place daily from November 24, 2017 through January 7, 2018.

The all-new “Christmas in The Wizarding World of Harry Potter” experience invites guests to celebrate this special time of year in J.K. Rowling’s compelling Wizarding World for themselves.

As night falls on Hogsmeade village, “The Magic of Christmas at Hogwarts TM Castle” will illuminate Hogwarts™ School of Witchcraft and Wizardry with colorful imagery and impressive dimensional animations that dance across Hogwarts castle in tandem to a musical arrangement from the Harry Potter movies. “Christmas in The Wizarding World of Harry Potter” represents the immersive land’s first holiday themed program since opening at Universal Studios Hollywood in 2016.

“Grinchmas™” returns to Universal Studios Hollywood with a Who-lebration of fun fit for The Grinch, his faithful dog Max and a roster of Who-ville Whos.  The annual event comes to life with a towering 60 foot tall whimsical “Grinchmas” tree where Martha May Who-vier and the Who Dolls will take center stage performing energetic musical sets to usher in the Christmas season in style.  TheWho-liday Singers—a hip boy-band ensemble—will perform nightly a cappella concerts featuring a mix of Christmas favorites and pop rock.

Spirited holiday décor and festive whimsy will permeate throughout the theme park including “Despicable Me Minion Mayhem” and the adjoining “Super Silly Fun Land” as a crew of very merry and mischievous Minions gleefully spread Christmas cheer to visitors of all ages.

A spectacular 40-foot tall Christmas tree will glisten with 200,000 LED icicles choreographed to the lights and sounds of the season in the 5 Towers plaza. Santa Claus will make nightly appearances and offer special photo opportunities at 5 Towers. The iconic, dancing water fountain situated at the heart of CityWalk will also make a splash this holiday season. This visually dynamic fountain, displaying over 230 individual power jets, will project streams of choreographed water into the air complemented by red and green LED lights and an array of holiday-themed music.

Free concert performances at “5 Towers” and an eclectic ensemble of talented street performers will make CityWalk the ultimate L.A. holiday destination. The spirit of the season continues with a wintertime transformation of Universal CityWalk, beginning the day after Thanksgiving on Friday, November 24 through Sunday, December 23, 2017.