As I sit inside on this snowy March afternoon, I reminisce one of my favorite days at Magic Kingdom. My sister and I took a trip in September for our birthdays and this day in particular was quite magical. It was our first day after a late flight and only a few hours of sleep. Regardless, we showed up bright and early to check out Main Street for the hour before park opening. 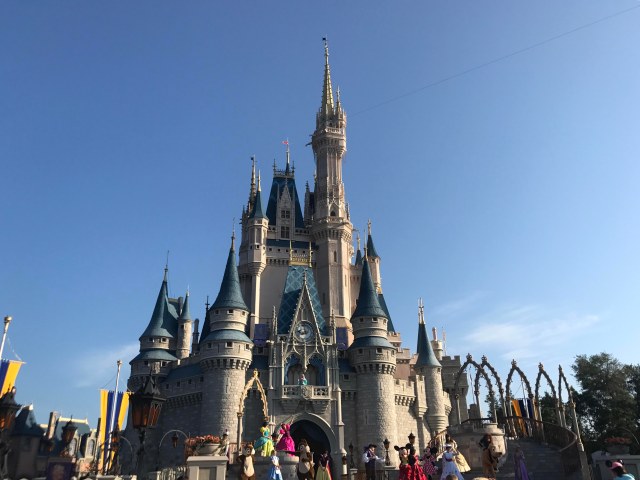 After getting our much-needed caffeine fix at Starbucks, we were able to get some great PhotoPass pictures and see the new opening show at the castle stage.

We grabbed breakfast at Sleepy Hollow Refreshments (at the entrance of Liberty Square to the left of the castle). If you haven’t had a waffle sandwich from there yet, make it a point to! The one seen in the photo is the Fresh Fruit Waffle Sandwich made with a chocolate-hazelnut spread. They also serve Mickey Waffles with powdered sugar or whipped cream and strawberries.

While walking to the Haunted Mansion, we accidentally caught the new Liberty Square show, “The Muppets Present…Great Moments in American History ” and were pleasantly surprised. It captures the essence of The Muppets- their humor, fun songs, and great visual aspects- all in about 10 minutes. I definitely suggest stopping by as you’re passing through Liberty Square. Show times seem to be pretty frequent. 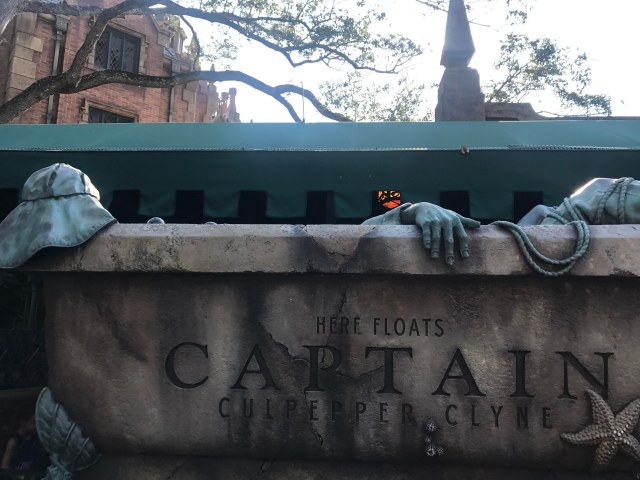 We spent the rest of the morning riding the staples, like Haunted Mansion.

On our way to Frontierland, we bumped into my favorite Country Bear character, Big Al! 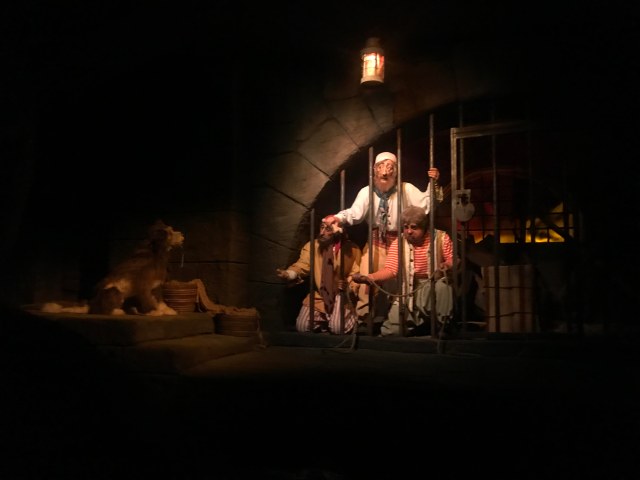 I can’t seem to stop myself from photographing this iconic scene from Pirates of the Caribbean every time I ride it.

When we moved on to Tomorrowland, we noticed this guy rolling around. I began video recording him and he whipped around and rolled right towards us, announcing that he knew I was recording him. He took our hands and gave us a tour of Tomorrowland. As we toured, he asked where we were from. When we replied that we were from New York, he told us all about “Old York.” After our tour, his attendant snapped a picture of us together and then we were free to go. It’s magical moments like this one that are so special and keep me coming back to Disney!

My shirt (from MainStreetPress) clearly shows my favorite attraction at Magic Kingdom. If you haven’t been on the PeopleMover yet, definitely try it out. It’s a relaxing ride around Tomorrowland that rarely ever has a long wait. You get great views of Cinderella Castle too! It takes you through Space Mountain, above Buzz Lightyear’s Space Ranger Spin, and through other futuristic scenes. 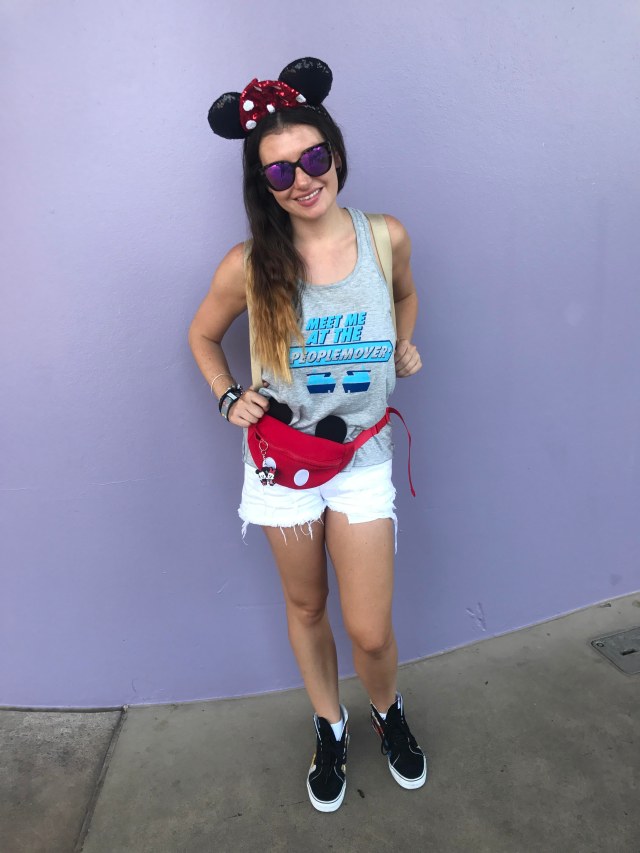 This month, the iconic “Purple Wall” at the entrance of Tomorrowland was being painted white! However, a portion of the purple was left untouched. Why is this wall so popular? Instagram, mostly. It joins other fellow walls in trending hashtags, like the Bubblegum Wall at Epcot and the Moss Wall at Pandora-World of Avatar. I have even begun to see PhotoPass photographers posted up at the some of these walls! As for the Purple Wall, the lighting reflected off of it really does make for great pictures.

Catch this great photo opportunity of the castle as you make your way around the park.

While waiting for our Fastpass time for Seven Dwarfs Mine train, we stopped at Mickey’s Philharmagic Show. It’s a cute 3D show (which could use some serious updating in terms of it’s 3D technology) that features songs from scenes of popular Disney movies. 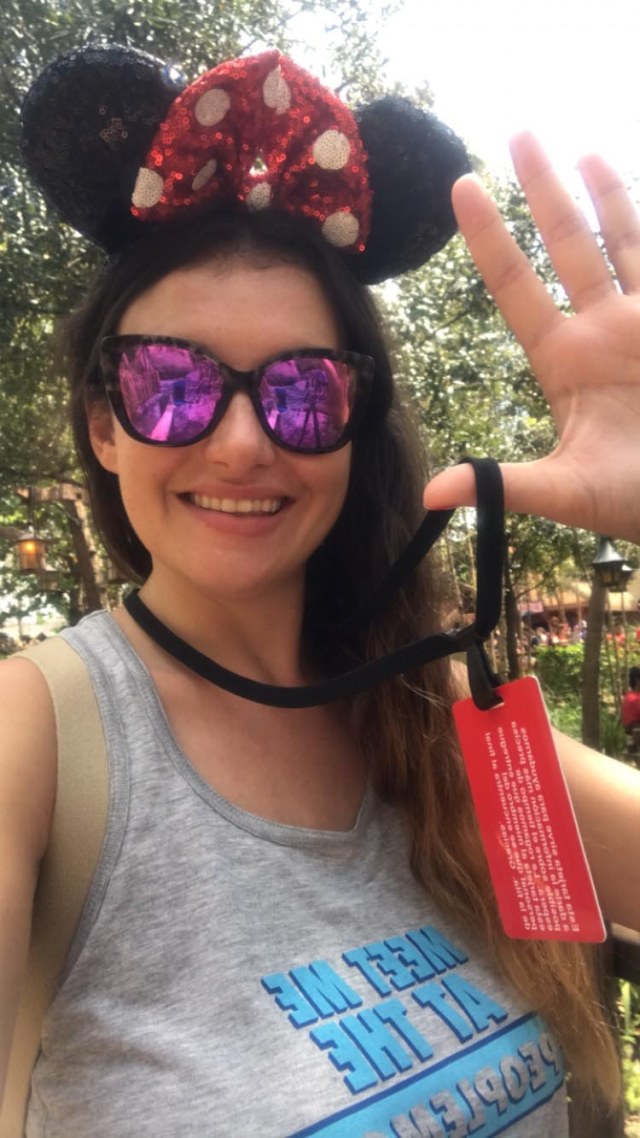 I received the highest honor while entering the Fastpass line for Seven Dwarfs Mine Train. I know I’m not the only one who gets excited about this. For those who have no idea what this is, it’s just a time keeping card that Cast Members hand you so they can update the wait times of the attraction you’re about to ride. 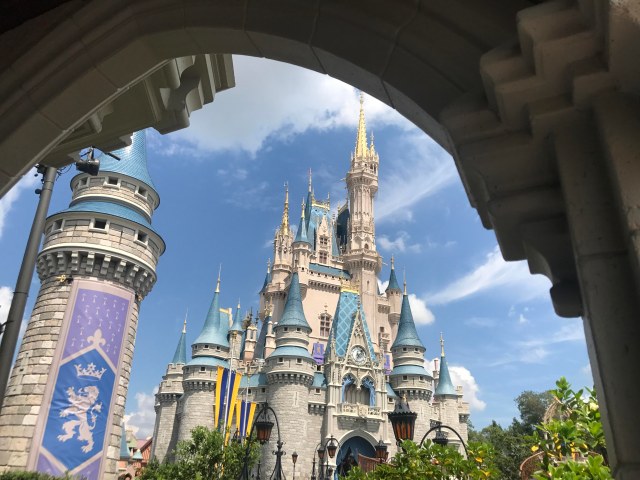 The archways around the castle hub area make for more great castle pictures.

As the temperatures and crowds reached the high of the day, we took a break from the magic to drink around the monorail, which is arguably just as magical.

We began at the Tambu Lounge at the Polynesian Resort. 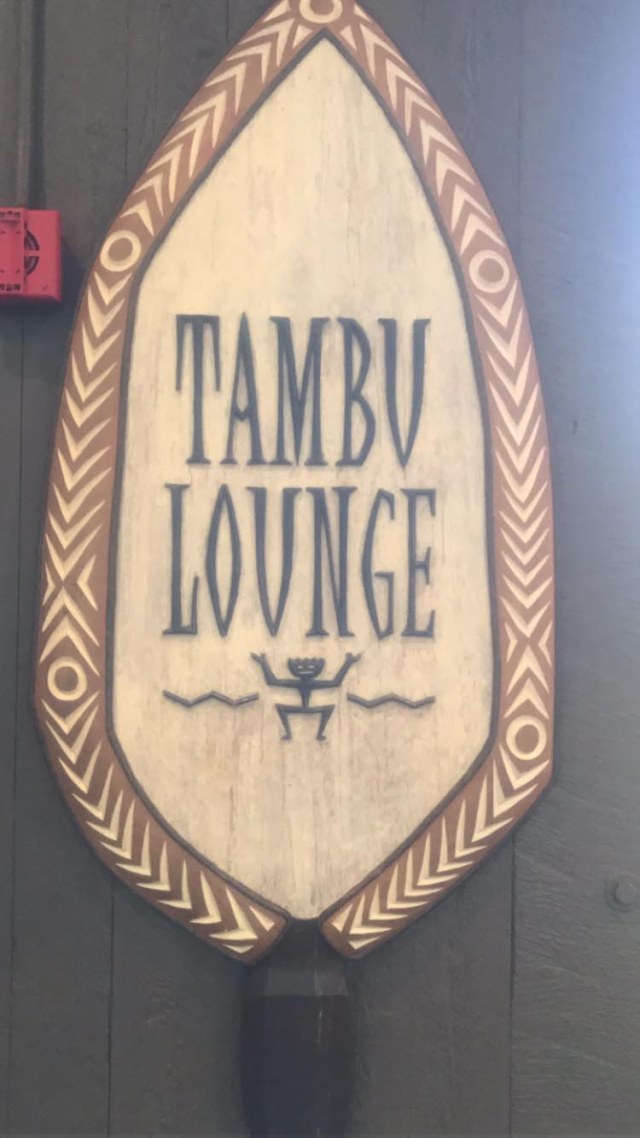 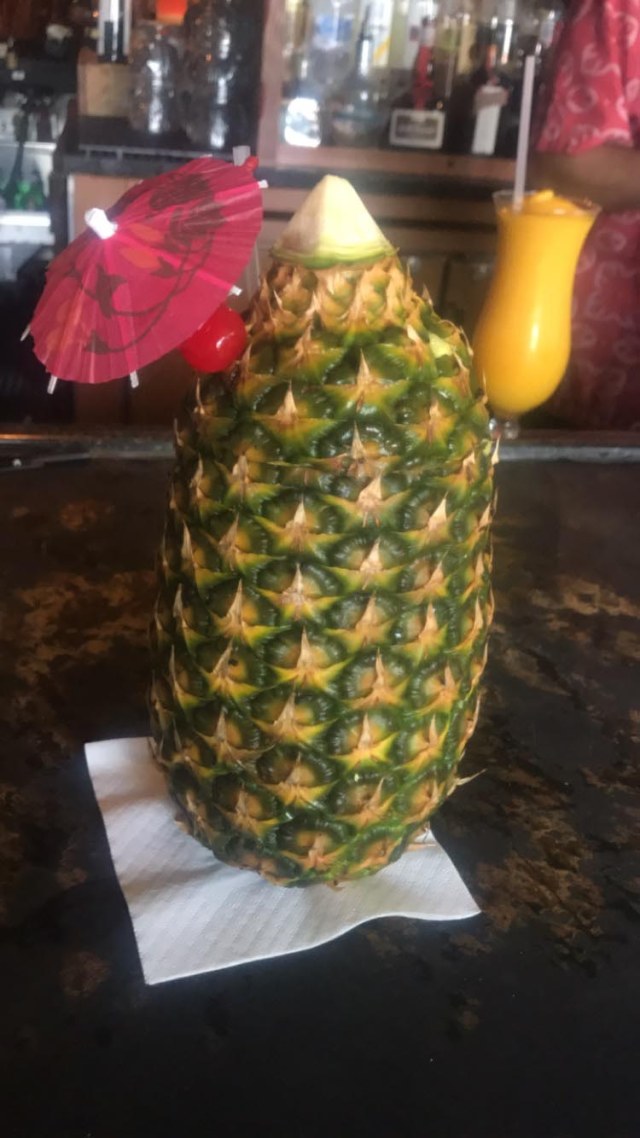 I enjoyed the Lapu Lapu, which had rum and tropical juices served in a pineapple. 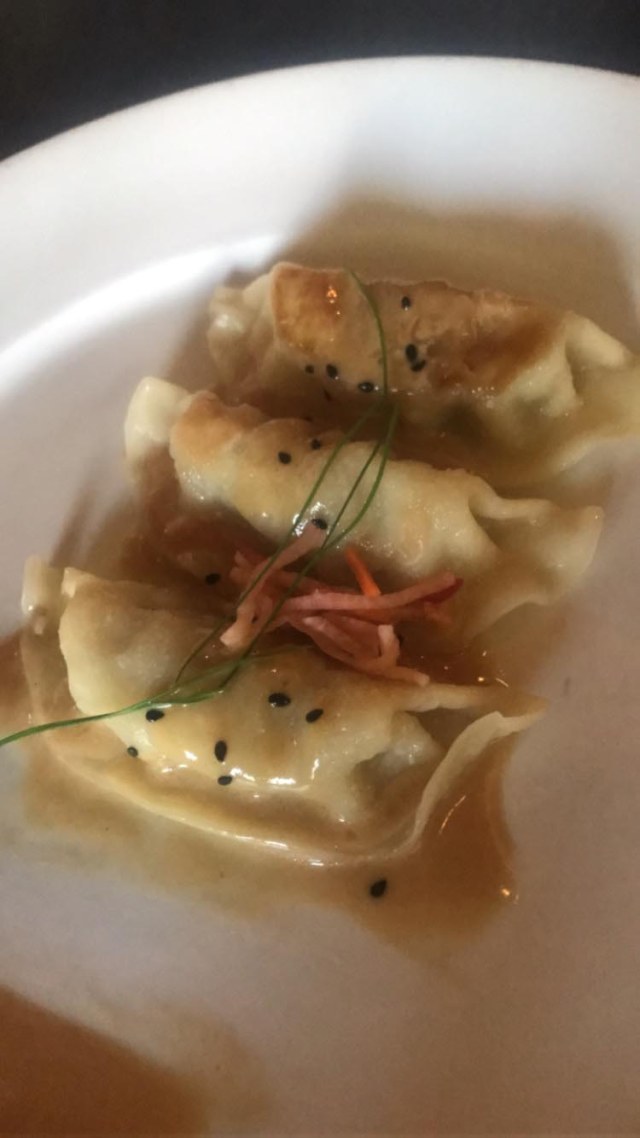 We snacked on some delicious potstickers while enjoying our drinks.

Our next stop was Mizner’s Lounge at the Grand Floridian.

We drank the Grand Cocktail (vodka, pomegranate liqueur, cranberry juice and soda water). They did not serve appetizers until 5pm, but the bartender continuously refilled that yummy trail mix scene in the photo. 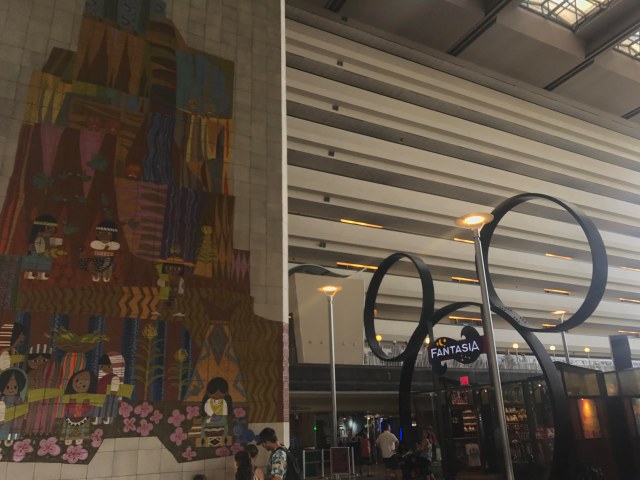 Our last stop was at the Contemporary Resort at The Wave Lounge. 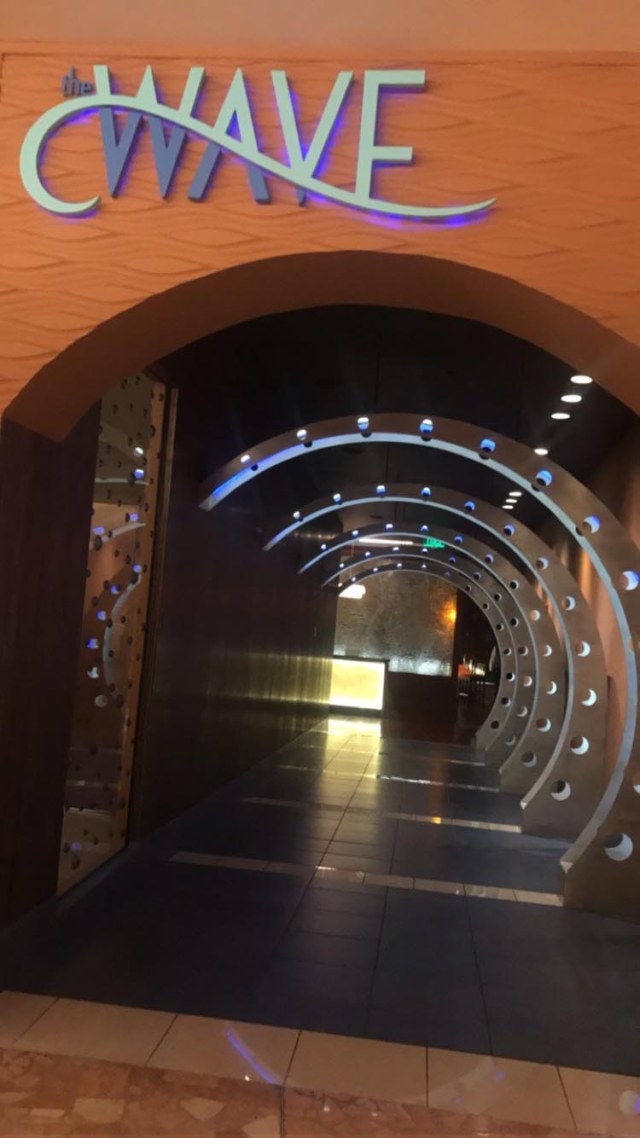 Upon our return to the kingdom, after all those drinks, naturally we made our way to the hub grass to nap. I highly recommend resting in this area during your Magic Kingdom visit. It’s also another fun place to take some photos. 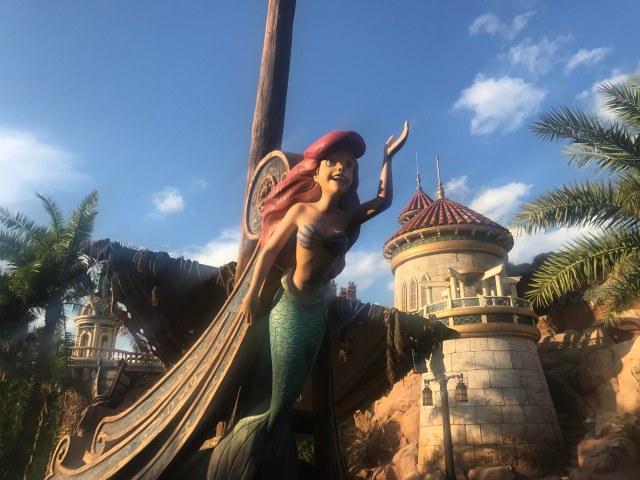 After our nap, we jumped on Under the Sea- Journey of the Little Mermaid before our dinner reservations.

Dinner was at Be our Guest Restaurant. We enjoyed a bottle of the Enchanted Rosé. I absolutely loved my entrée of the Sautéed Shrimp and Scallops. They were served over pasta with lobster, mushrooms, and vegetables in a creamy lobster sauce. Starting July 27, 2018, Be Our Guest Restaurant will be switching over to a 3-course prixe fixe menu. 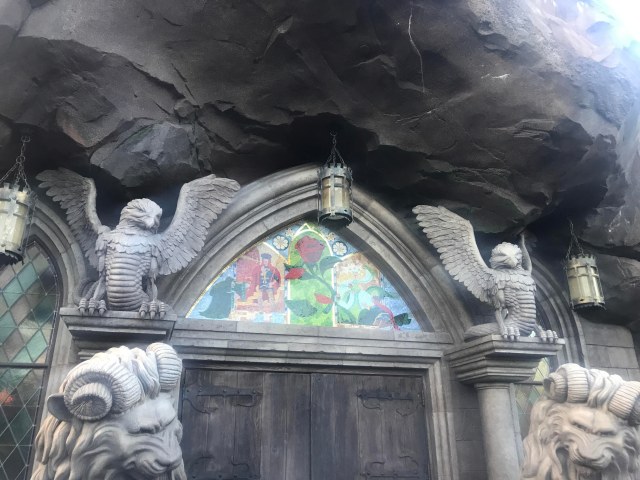 We ate in the West Wing and absolutely loved the ambiance. Nevertheless, every part of the restaurant is beautiful. 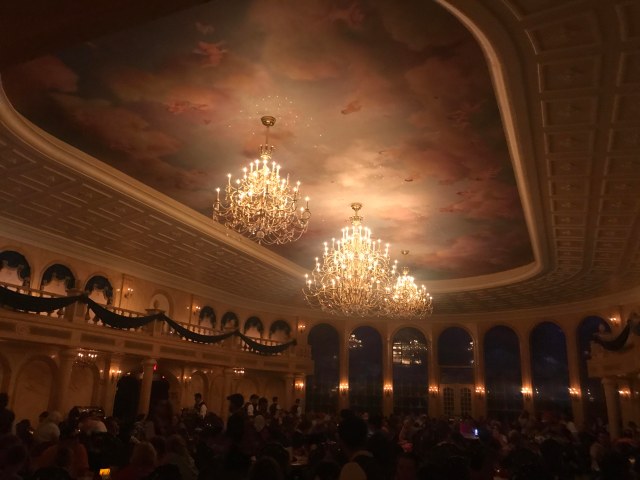 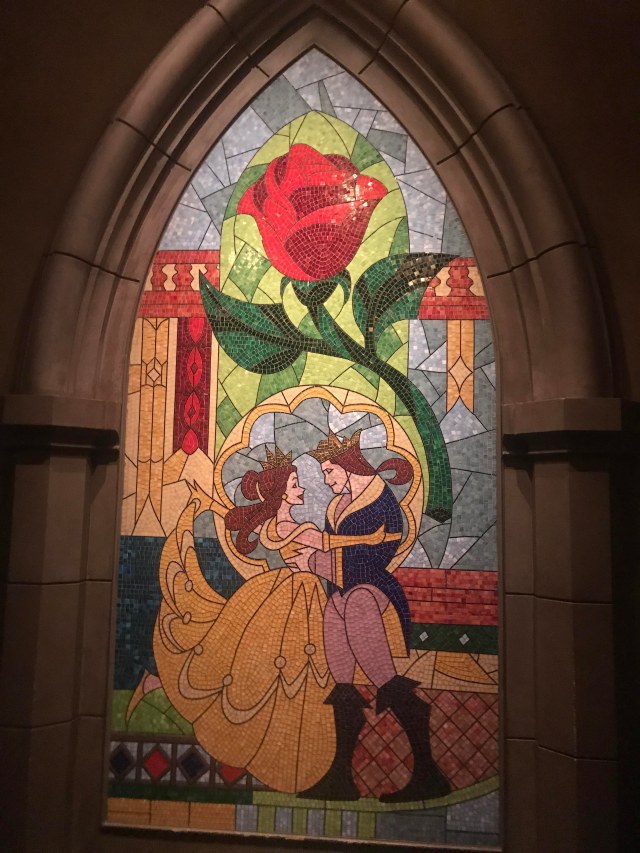 Finally, it was time for some new nighttime fun. 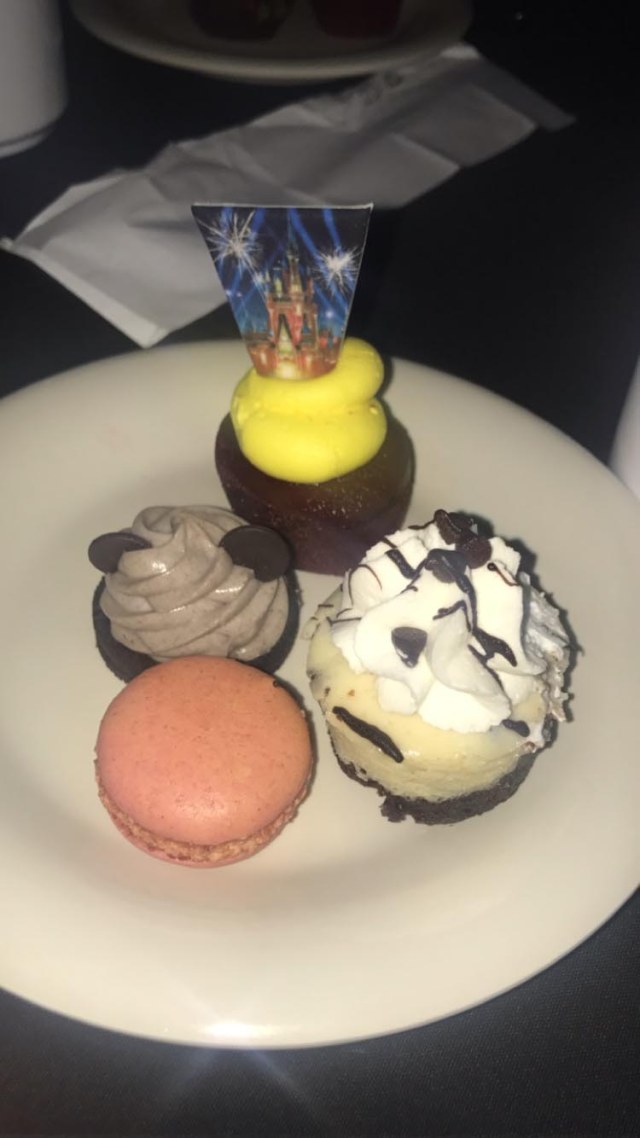 We tried out the Fireworks Dessert Party with Plaza Garden Viewing. You begin at the Tomorrowland Terrace where there is a spread of desserts like the ones seen in the photo. They also serve sparkling cider, coffee and tea. You have the option of eating your dessert at tables on the terrace, but everyone pretty much brought their food and drinks to the hub grass, where a cast member leads you and lets you past the rope. I would say this particular dessert party is not worth the $60 per person, as I could get better desserts and viewing spots without the extra cost. However, I have never tried any other dessert parties before, so I am solely speaking about this one. 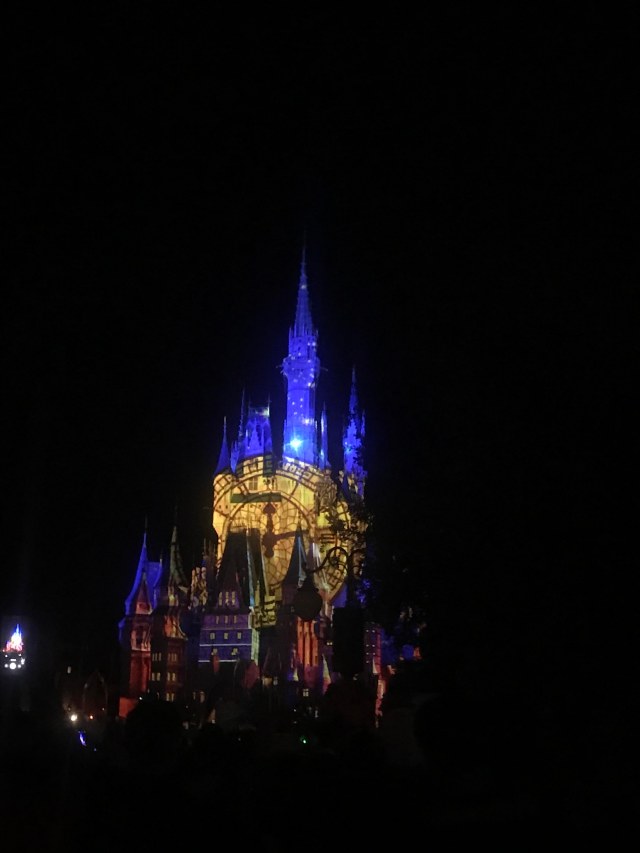 Once Upon a Time is a projection show on the castle, separate from Happily Ever After. It was absolutely stunning.

We ended the night with our first time seeing Happily Ever After. I was hesitant about it because I loved Wishes so much. Yet, I was surprised by how quickly I fell in love with this show. I wished (no pun intended) it’s fireworks were as intricate as Wishes, but I did particularly enjoy the castle projections and the emphasis on songs from non-trendy Disney movies like Hercules, The Hunchback of Notre Dame and Brave. 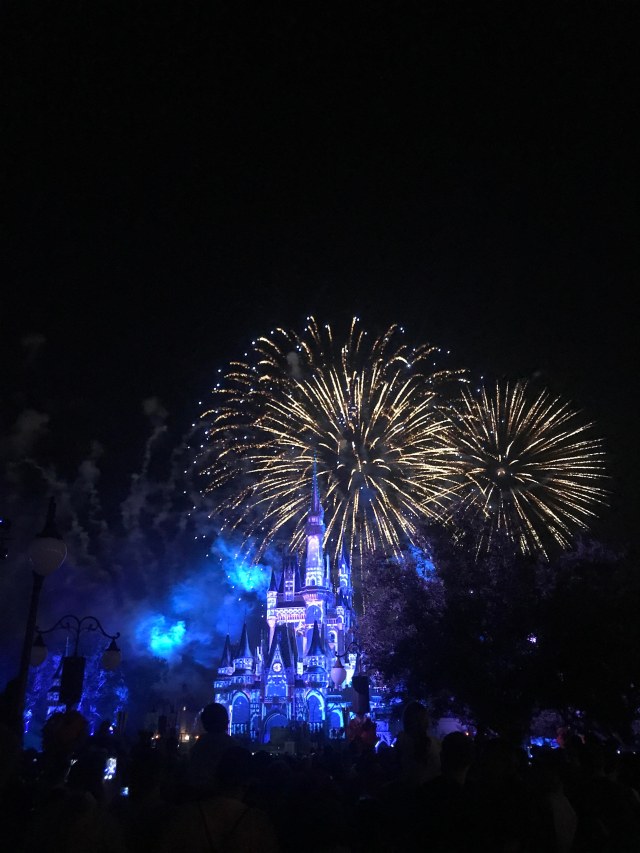 To me, this was a perfect day spent at Magic Kingdom. The weather was flawless and we did everything we wanted to do without exhausting ourselves. This day had just the right amount of Disney magic mixed with adult magic. I hope you enjoyed reliving this memory with me!