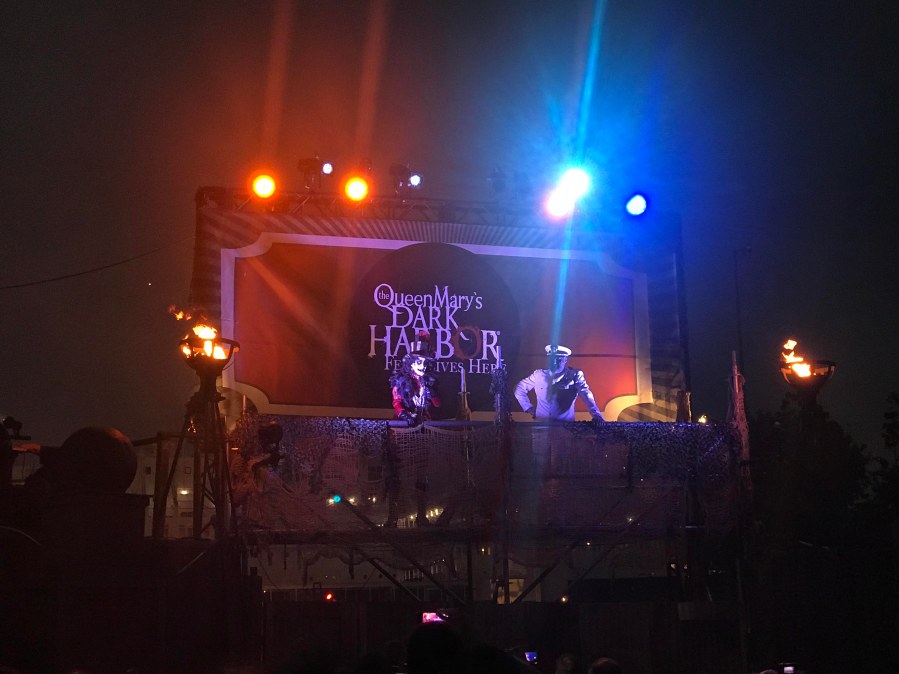 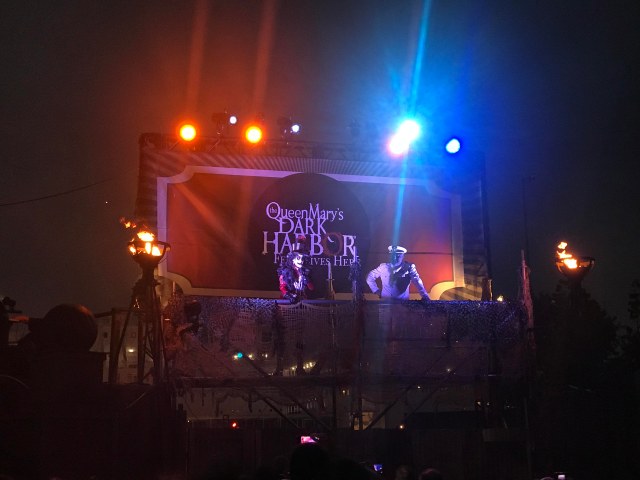 Since its debut in 2010, Queen Mary’s Dark Harbor has stood out as the only major Halloween event in Southern California with a truly haunting past. The stage is set by the over eighty-year-old ship that has seen decades of paranormal activity with sightings continuing to this day.

Whether haunted or not, the long corridors, tiny windows and smells create an authentic backdrop that is unmatched by other Southern California Halloween events even before the monsters and sets are added. Despite the incredible setting, Dark Harbor has never quite lived up to its potential to be a top-tier event on par with Knott’s Scary Farm and Halloween Horror Nights. This simply might be because of the actual footprint. Dark Harbor is working with far less space than either of it’s competitors. But, this year’s event has taken a big step toward closing that gap. 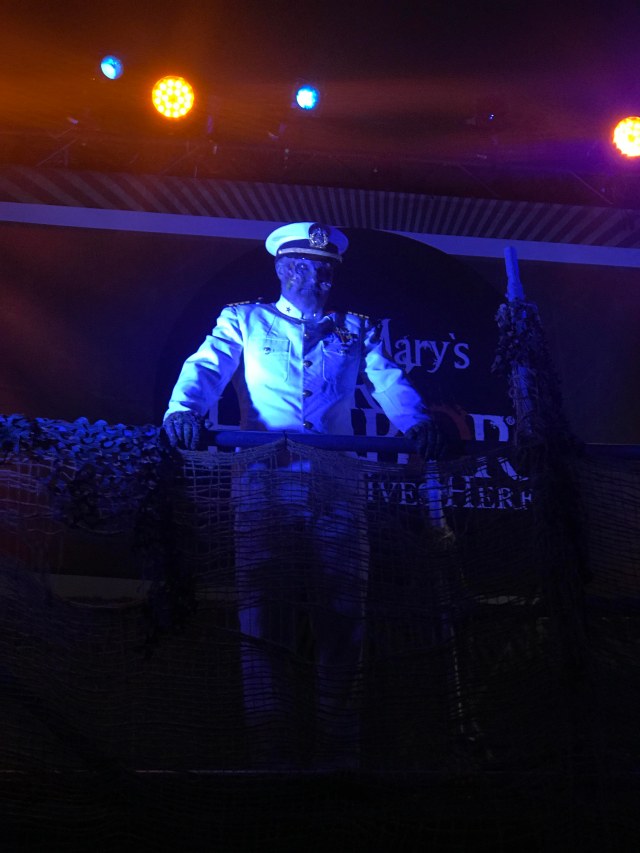 I was initially skeptical of this decision since the event badly needs another maze or two to help with capacity on busier nights. Once I experienced the newly reimagined mazes, I was glad the creative team decided to focus on improving the existing mazes instead of creating only one brand new one that would have made the other ones look bad in contrast. Each maze has a new path and some have even moved locations altogether Let’s take a closer look at this year’s line-up!

“It’s the night before a dust-covered, rickety old circus opens to the public. Sneak beyond the curtains to unveil the horrors lurking within the shadows of the big top. Hosting a menagerie of monsters and sinister creatures, the one and only Ringmaster returns with unadulterated and unbelievable horrors for all who step inside Circus!” 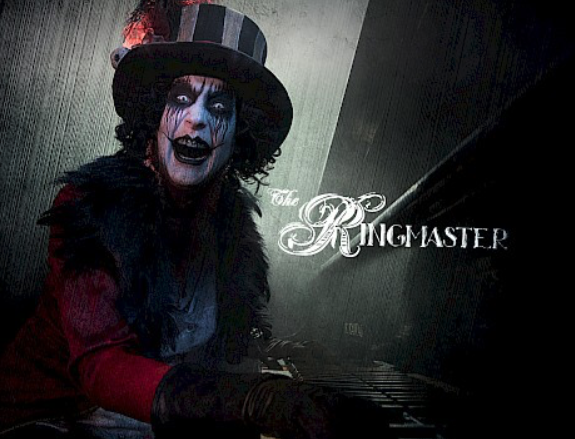 The Ringmaster character is one of my favorite parts of Dark Harbor’s lore yet The Circus maze has never connected for me.

This year’s version felt especially lifeless with fewer characters and little set dressing. I would love to see Dark Harbor retire The Circus and replace it with something that connected more to the Queen Mary’s history. Just please save room somewhere for The Ringmaster. 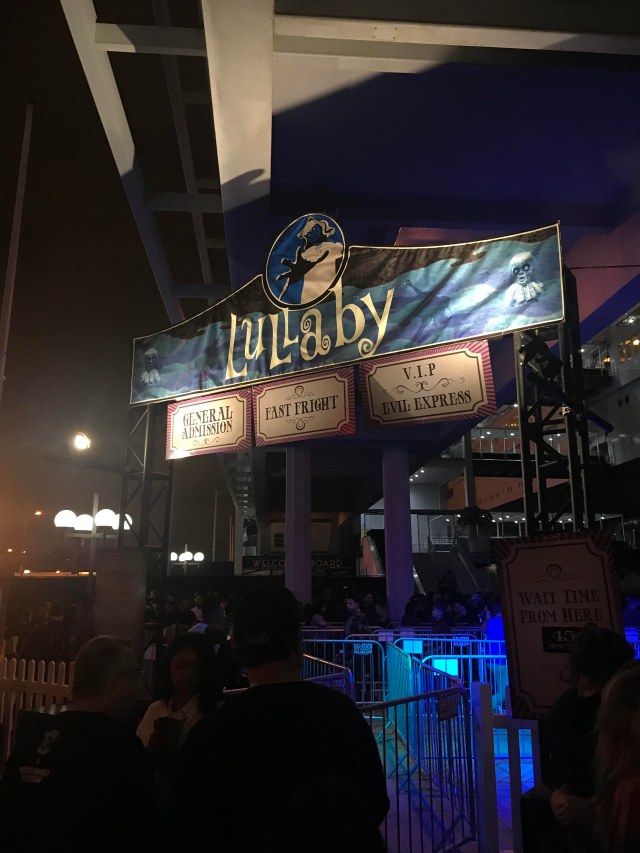 “Many spirits linger in the First-Class Swimming Pool, but Mary is the youngest of the ship’s collected souls—and the most playful. With her Teddy Bear in one hand, and the other reaching for you, she is always seeking new friends to play with, whom she can keep forever.  Though her life came to a tragic end after drowning aboard the ship in 1952, the sounds of an eternal lullaby and sightings of a young girl have taken over the ship once more. Mary’s untimely death launched international paranormal investigations that resulted in the presence of an ominous vortex near the changing rooms, acting as a crossing point for all spirits. When playing games with Mary, be sure she’s not leading you down a path from which you won’t return…”

Lullaby was my favorite maze in recent years, but this year’s version just didn’t have the same impact. The storyline has been changed with Scary Mary being possessed by a demonic spirit that inhabits her teddy bear. 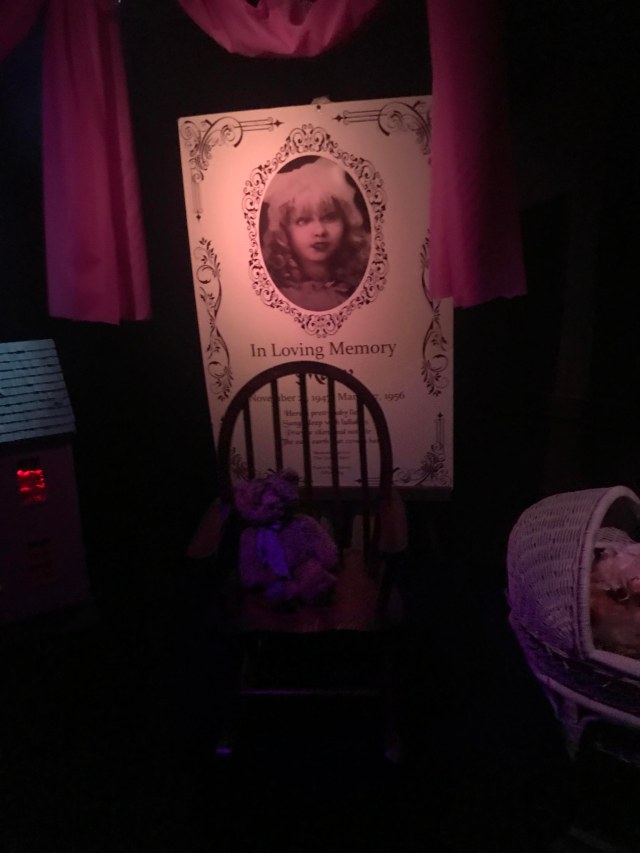 In the past, the story was centered around Scary Mary drowning to death and haunting the ship with watery imagery and spirits. The iconic swimming pool scene is nowhere to be found this year. Although the new setting and storyline didn’t connect with me, I was thoroughly impressed by the actors that play the many versions of Scary Mary throughout the maze. Every single one delivered a slightly different take on the character with each one more unnerving than the last. 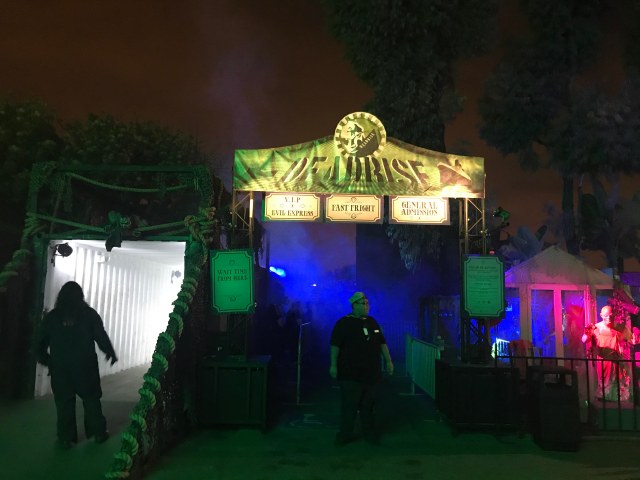 “It has been rumored about the Ship and throughout Dark Harbor that only half of spine-chilling Henry’s story is known. An infamous daredevil, Henry’s reputation stems from his years aboard the ship as a crew fireman—before a deadly game of chicken inducted the severed soul into his eternal voyage.” 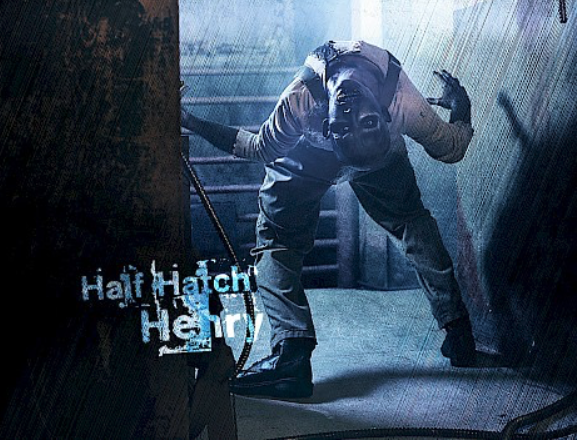 Deadrise returns for 2018 with multiple paths that help rejuvenate a maze that had felt stale last year. I think my group had the most fun in this maze even though the scare actors were few and far between. The adventure park inspired obstacles like the climbing rope, slide and elevated platforms ensure your group works together just to navigate this oddly constructed maze.

A scare actor toward the end of Deadrise did provide me with the best scare of the night, but I can’t reveal the specifics without giving away spoilers.

“All Aboard! The Ghost Train Waits…A phantom coach forces the Queen Mary’s original ship builder to relive his wicked wrongdoings to shipyard mates, Scottish brethren and plagued family that led to the Iron Hell his soul rots away in. Follow the spine-chilling path to an evil sea witch where a deadly pact was made spawning the horrific half-metal, half-creature known as the Iron Master.” 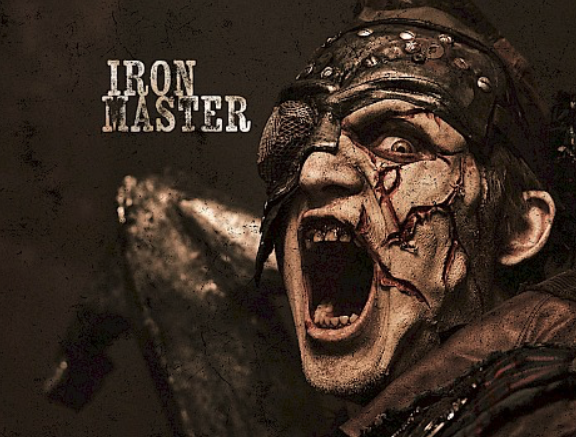 Intrepid has come so far, but is still not quite at the level of Feast and B340. The new outdoor cemetery set in Intrepid is truly jaw dropping, but unfortunately it is awkwardly juxtaposed with old scenic designs that fill out of place. 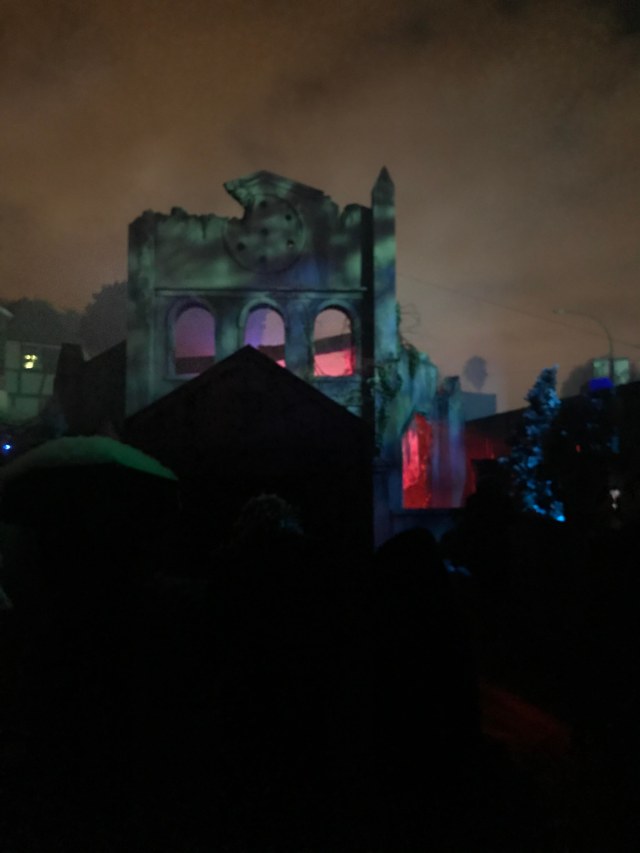 The maze is much improved from last year with a gothic romanticism reminiscent of Guillermo del Toro’s Crimson Peak. The aforementioned cemetery is beautiful constructed and lit with a snow machine that provides an extra elegant effect. The opening train scene and cemetery are fantastic, but soon give away to generic stone corridors that are sparsely populated with monsters. The Iron Master character greets you in the finale room with a full conversation about the Queen Mary that feels just as out of place as the second half of the maze. 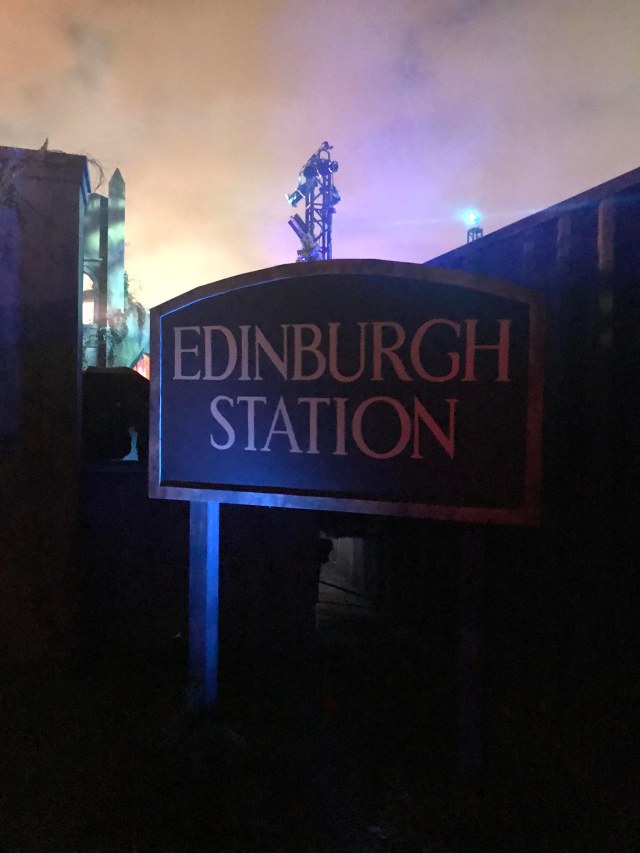 Hopefully, the Dark Harbor team will tweak Intrepid into having just one consistent theme of gothic horror. It has a good chance of landing the top spot on my list next year with just a few tweaks.

“A series of inhuman crimes tormented the Queen Mary passengers during a routine cross-Atlantic voyage in October of 1948. Follow the lead detective on the scene as he uncovers the evil truth behind one of the most notorious criminals to ever invade the luxury liner: Samuel the Savage. The investigation follows a sinister journey filled with terrifying twists and turns that point to the most infamous stateroom on the ship: B340.” 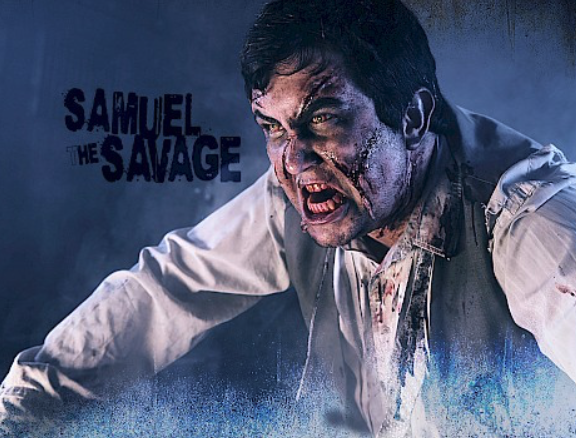 B340 returns this year with a revamped storyline and brand new creatures to create a maze that is much more intense than past incarnations.

The nuns and school decor has been replaced with distorted demons and ritual sacrifice. My favorite change is the reduction in the number of times you encounter the titular character, Samuel the Savage, which heightens the effect when you finally come face-to-face with him. The highlight of the maze for me is still the long walk across the ship’s cat-walks in mid-air. The eerie groans of the eighty-two year old metal structure make the imagined terrors of falling to your death all the more tangible in your mind.

“After rumors of missing soldiers and crewmembers spread throughout the ship during WWII, all signs and trails of blood led back to the depths of the kitchens. Upon the realization that the crew had been eating human meat, mutiny arose, and Chef was brutally cast into his oven and left for dead. But now, he’s back. Next item on the menu? You.”

Last year, Feast debuted as the new maze for the 2017 season and returns this year in a completely new location, replacing the retired Soulmate maze. The new location, at the stern of the ship, is filled with machinery and makes for a bit of an odd choice consider the maze’s story is centered around luxury dining and kitchen.

Despite the unusual setting and decor, Feast was far and away the maze that delivered the most scares during the night I visited. The ship’s machinery provides dozens of perfect hiding places for monsters to sneak up on you from. 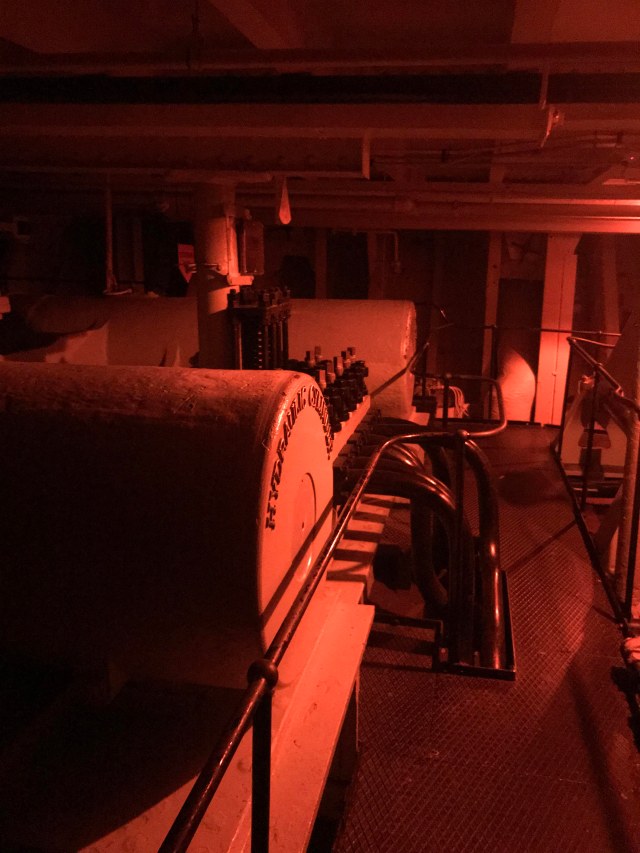 Nearly pitch black coordiors mixed with brightly lit scenes make it tough for your eyes to adjust and spot the creatures waiting for you up ahead. A revamped sound design heightens the tension and helps make the monsters come alive. My favorite part of Feast is the large amount of the ship you are able to explore, which was surprisingly filled with monsters at nearly every turn the night we visited. Feast is properly paced and delivers on a lengthy set of thrills unlike many mazes that end just as they are about to begin. 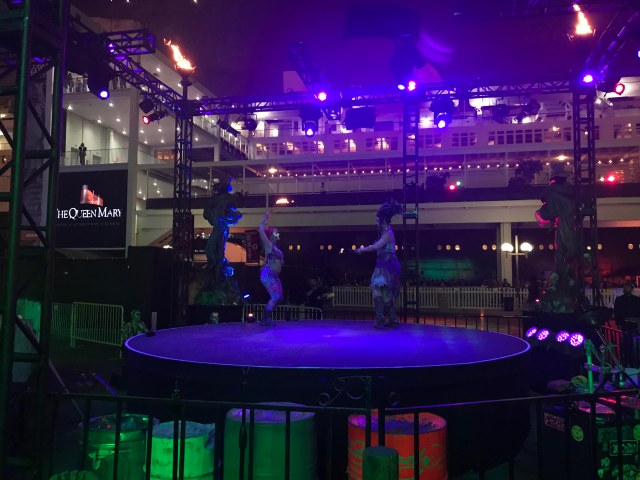 I have to admit that I never make it a priority to watch live shows at Halloween events. My main focus is the mazes, followed closely by the scare zones. Despite this, I really enjoyed the small sideshows offered at this year’s Dark Harbor. The event offers numerous shows including Slider Alley, Aerial Ring, The Pyre fire breathers, Monster Dance Party, PANIC: 4-D Theater experience, DJs and more.

We had a chance to watch the talented sliders in Slider Alley perform their impressive feats of sliding and jumping in a fun show that tapped into the crowd’s energy. We also enjoyed The Pyre fire breathers show while grabbing a bite to eat. Both shows were the perfect length to provide a short break from the scares while we recharged our stamina for more mazes.

Queen Mary really likes to promote how many bars they have. Secret bars, hidden bars, cold bars, easy to find bars; you name it they got it!

They have identified themselves as the place to get a strong spirit (PUN INTENDED) and big frights. As someone who doesn’t drink that often, the wide variety of bars doesn’t appeal to me. But, I can see how the variety of options can be a determining factor in attendance to the event.

With the added factor of secret bars within mazes, it adds another level of interaction and immersion when experiencing Dark Harbor.

A Big Improvement from 2017

Congratulations to the entire cast and crew of Dark Harbor for delivering such an improved event this year. Dark Harbor continues to provide incredible value year after year with tickets that are half the price of Knott’s Scary Farm and a fourth of the steep price Halloween Horror Nights charges. Tickets start as low as $20 on the official website and are offered for even less on Groupon. 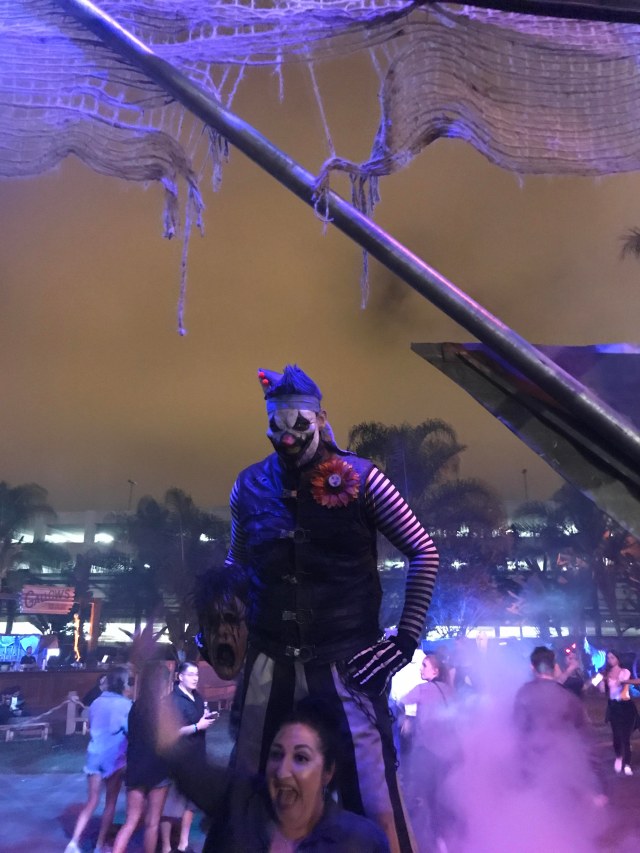 The fun party-like atmosphere combined with the scary yet somewhat corny tone reminds me of Knott’s Scary Farm in the early 2000s. The talented cast of monsters are the heart and soul of the event. Unlike some events, Queen Mary’s monsters are allowed to improvise, which makes every maze walk-through unique and provides for thrilling one-on-one in your face scares that the larger events lack. I hope that as Dark Harbor continues to grow in the coming years that it doesn’t lose the unique dark comedic sensibility and monster improvisation that makes it stand out from its peers. 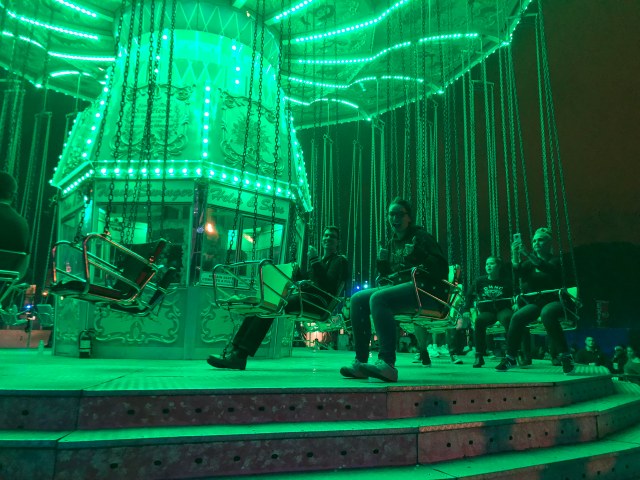 Make sure to visit Dark Harbor this year and share your thoughts with us on social media and in the comments below.

– Try to arrive an hour early or take Lyft/Uber to avoid parking hell. Parking is a nightmare due to such a small lot and construction on the surrounding access roads.

– Head to the back and do the mazes on the ship first to avoid lines. The other mazes are better to do when it’s dark outside.

– Try out the interactive scare effects located in the secret bars. trigger  scares like cannons and other effects on unsuspecting guests as you watch them jump in terror on camera.