I grew up loving horror films. That being said I wouldn’t call myself an expert on them.  I just always loved the idea of being scared. I had never gone to anything like HHN before other than a local event at the theme park I grew up closest to Carowinds. The event was aptly named Scarowinds. Clever. And it is a more low budget affair, not to put it down in anyway, its just the nature of a smaller theme park. And while its base principal of jump scares are similar at both events HHN excels with putting you in the middle of franchises that you are familiar with. And not just in concept. The houses are as well themed as anything gets in a theme park. Dare I say the houses are better than 90 percent of the rest of the park on a normal day. (not hyperbole) Needless to say I was blown away.

I took a risk, I went for the Frequent Fear Pass. Having never done the event before I was a little nervous about dropping 130 bucks for a pass not knowing if I’d ever be going back but since I live less than 5 miles away from Universal, I figured I’d be back. One thing I DO NOT like is parking is not included this year. However this isn’t horrible for us since we Uber there and back home. Seeing as how binge drinking is apart of the event (more on that later) its a good idea to uber or taxi.

Lets do a quick walk through of my first night. First thing we had to do was get the souvenir refillable cup. I cant remember the exact price but I want to say it was liek 12.99 with refills of 6.99. Don’t quote me on that, but that is alcoholic beverages. First house we made it to was the Poltergeist house, which is my favorite horror movie of all time. This house is the main reason I wanted to go this year. When we got there the line was posted at 35 minutes, we waited about 20. Without spoiling the house in anyway, it was so accurate to the film it kinda freaked me out. I remember seeing that film as a kid and having nightmares for weeks after. The house itself felt like I was walking through that nightmare. They did a superb job. Next thing we did was Rip Ride Rocket. I know, I know, people hate it, don’t @ me bro. It was a walk on so we took advantage. 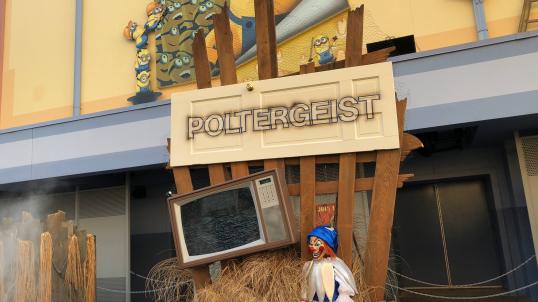 After that we went to Carnival Graveyard Rust in Pieces, which really defied my expectations for it. Again since I had never gone before, I didn’t know what to expect. I figured with the big named houses they would put in the effort, but I wasn’t so sure they would do that with the smaller named houses, but they really did. So much in fact, that this has been the scariest house I have done so far.
One thing I like a lot about HHN is getting to do the rest of the park as well, after the Carnival Graveyard house I was CRAVING a Butter Beer. I hadn’t had one in 2 years and oh man did it hit the spot. By the way, I don’t get frozen Butter Beer, its nowhere near as good to me as OG Butter Beer. Also a friend of mine got ice cream from the ice cream shop, it was SOOOOO good. Definitely give that a shot next time. From there we walked around the rest of the park and went through our next house. Trick or Treat.

I thought I had seen this film before, and then after we did this house Holly wanted to see the film and go back through the house. And when we started to watch it I realized I hadn’t seen it. It again was themed so well it was almost overwhelming, but now that I have seen this film, I’m excited to go back through it and enjoy it on another level.
Like I mentioned before booze plays a BIG part of this even, as well as food. Like I mentioned before we bought the refill cup. We tried two of the three signature drinks they have. They are premixed, which sucks but its great when that line gets long, and they are strong drinks. The cup comes with two divided slots and a twisty straw and its cool because you can mix and match. Great idea, and most flavor combos work. There is no shortage of places to grab these drinks. There are carts everywhere. 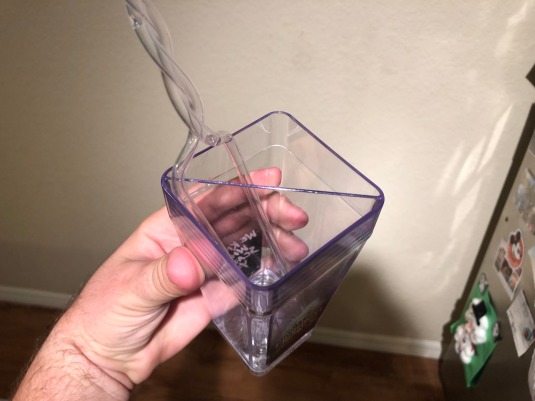 The food is just as big if not bigger than the booze. They have all kinds of special food items for the event. Pizza Fries, Twisted Taters, (back by popular demand) waffles based on Stranger Things.  Out of all that yummy sounding stuff the only thing we tried was the twisted tater, which was delicious. We will be trying more stuff later, look for an update. 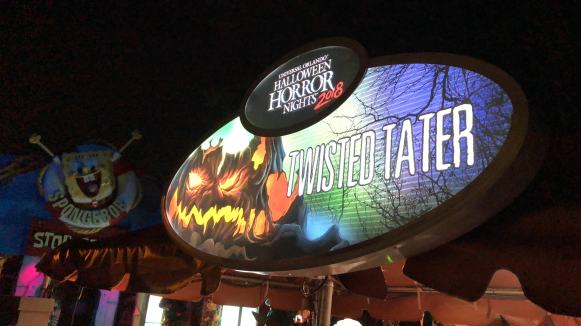 After this we just walked around a few of the Scare Zones, my favorite was the one based on Chucky. Nightmarish versions of your favorite toys, sounds odd but its awesome and it really works.

That is a short wrap up of my first ever HHN. I really got into this, and will be tradition for years to come. I will update this as I do more houses, so stay tuned. Also, if you want to see this in the form of a YouTube Video, go to my Channel Park Views With Brad Hughes and check it out. Thanks for the read, see ya soon!