When I was around 8 years old, I was shown a film called Killer Klowns From Outer Space and my life was never the same. Clowns were no longer the cute innocent laughable jokesters. They were evil, maniacal and wouldn’t hesitate to make you into their next meal. Years later, my deep rooted fear turned into intrigue and fascination. After that, it turned into obsession and now I cannot get enough of those crazy Klowns! To say we’re excited about Killer Klowns From Outer Space at Halloween Horror Nights is a complete understatement. Everything from the set design to the music, there is so much to be excited for in this highly anticipated maze at Halloween Horror Nights Hollywood and Orlando! Here are our Top 5 things we are excited to experience in the Killer Klowns From Outer Space maze at Halloween Horror Nights!

It’s really hard to reference this film without talking about the music. Do yourself a favor, before you continue reading, click play on the video below. you won’t regret it!

Now that we are in the mood, The Dickies theme song to Killer Klowns is iconic. It conjures up images of bright red noses, powder white makeup and maniacal laughter. Needless to say, we need to hear this outside the maze ALL NIGHT! It’s the perfect primer for entering the maze.

I would be remiss not to mention the actual score to the film itself. Arguably just as iconic as the theme for the film, the score sets the tone and mood for the entirety of the film. Its zany, wacky, funny and spooky.

We actually feel that it’s far enough from the norm of horror film music that it could almost act as a distraction from the scares or even have guests entering with a false sense of security. Especially with scares that pack a punch at HHN.

One of the major focal points of the film is the ship. The ship is large, colorful and imposing; and it’s perfect for a location within the maze! If you’ve seen any construction photos that have been posted on social media, including ours, you know that the entrance to the maze itself is the yellow and red tent of the ship. So we are guaranteed to get that at least! 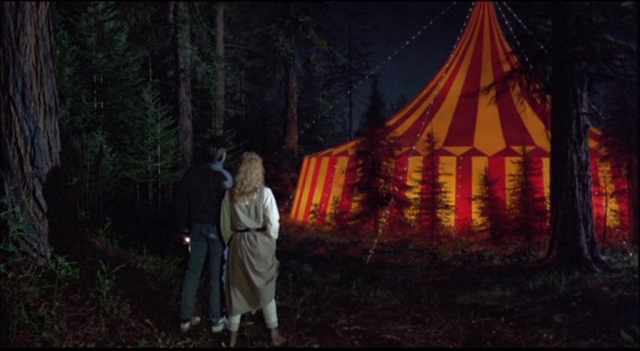 But what could be more intriguing is the interior of the ship itself. Hatch doors (with a very particular sound effect), colorful pipes running down endless hallways, bottomless pits, and the infamous cotton candy cocoon room.

Halloween Horror Nights in Hollywood usually utilizes black hallways as transitions between scenes. But we would love to see colorful pipes flowing through each one of those hallways, even if it doesn’t make too much sense. It’s the perfect touch of detail that could set this maze apart from the rest.

Out of any maze in HHN history, we are most intrigued by this one. Simply because every single other maze is rather straight forward, albeit with some styling. The set design and set dressing crews are going to have a field day with this particular maze because of its angular sets, bright colors and fun atmosphere; While still trying to maintain a scary atmosphere of course! Being able to walk the corridors of this not-so-fun house is exciting and terrifying all at the same time.

Probably the most gruesome part of this film is the cotton candy cocoons. Out in Orlando, the scare zone had cotton candy cocoons hanging throughout the area. Within a maze format, it can really make for a great scare moment. Something similar to the snowmen in Krampus! You’re completely surrounded by colorful cocoons (above and below) and only one of them is an actual scare actor.

We can only hope that the cocoons will be completely covering the walls in every direction you look to really immerse the guests into that environment. We also want to smell the cotton candy, but knowing the crazy people in creative. It will be mixed with the scent of decaying bodies as well, just to get people grossed out! WE LOVE IT! 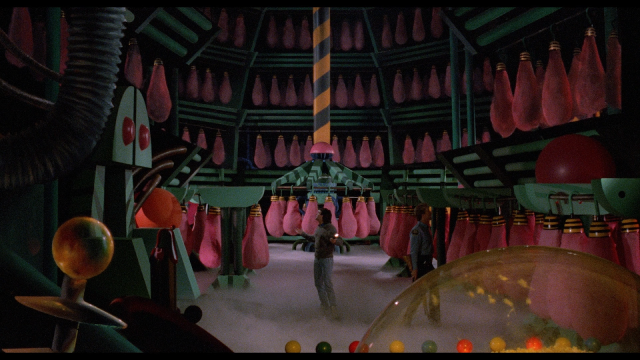 Yes, Killer Klowns is considered a horror film… but that doesn’t stop it from having fun and zany ways of killing it’s victims! Throughout the film, the klowns are killing and catching their victims in interesting and extremely klowny ways.

We know the maze is all about the scares and that unfortunately (to the general public) will be what it’s judged upon. But, we really want to see HHN embrace the campy silliness of the scares and kills from the film. We want to see a pile of pies with a decaying skeleton poking out from the top. We want to see tiny knock the bikers block off, and we want to see the popcorn monsters popping out of a hamper in the bathroom. If the maze doesn’t have this tone, I feel like it would be akin to a Friday the 13th maze with no Jason or a Halloween maze with no Michael Myers. The humor plays such a huge role within the film that it would be extremely missed if it wasn’t incorporated in some fashion.

This seems like a no-brainer,THE KLOWNS! People usually remember the headlining klowns within the film, but there is such a wide variety of them and we want to see them all! We haven’t experienced being approached and stalked by these large lumbering creatures in person…yet. The stature of these creatures is intimidating and can really create some fantastic scares in a maze! If everything we’ve seen on youtube is any indication of things to come in Hollywood, we are seriously in for some crazy klown action this year at HHN.

If we are going to point out any klown in particular, it’s going to be Klownzilla! At the end of the film (spoiler alert), there is a klown so big that he can fit a human in his hands. HHN is no stranger to creating large puppets for its attractions. The first one that comes to mind is the Alien Queen from Alien Vs Predator. When we first walked through that scene, our jaws were on the floor. I want to relive that feeling, but with a massive klown in its spot. Only HHN can pull off something as massive and impressive as Klownzilla within a maze.

Clearly we are beyond excited for Killer Klowns from Outer Space to make its debut here in Hollywood! We will be there to welcome in the klowns with open arms…let’s just hope it doesn’t backfire and we end up in a cotton candy cocoon at the end of the night! Also, be careful what popcorn you eat while at HHN this year. Maybe sticking with pizza fries or a churro might be in your best interest.