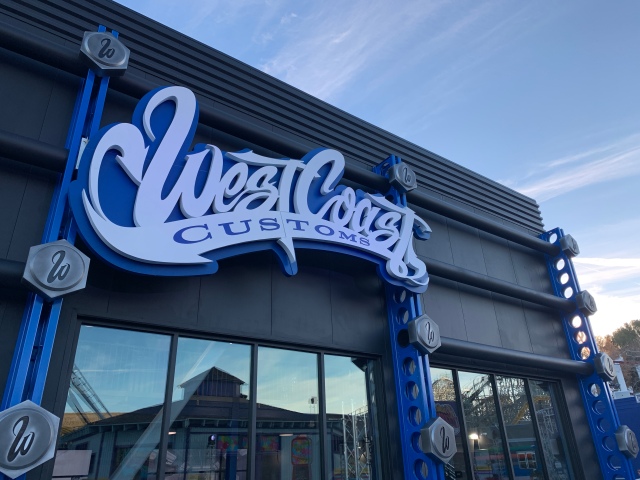 Back in August of 2018, Six Flags Magic Mountain announced a Brand New coaster that would bring their coaster count even higher. They announced the addition of West Coast Racers (manufactured by Premier Rides) and a creative partnership with West Coast Customs. This would be the world’s first Quadruple Launched Racing Coaster and many people were very excited about the coming addition. Now we are at the beginning of 2020 and the ride has finally opened. Although there were many snags in the plan and delays galore, the ride is opened to the public and with fantastic reviews.

We were some of the lucky few to ride WCR first and we absolutely love it. It may not be the fastest, tallest or scariest ride at SFMM, but does it pack a punch. It’s also extremely misleading. If you’re watching a full circuit off the ride, it looks rather tame. But once you’re on it, it’s a completely different story all together. 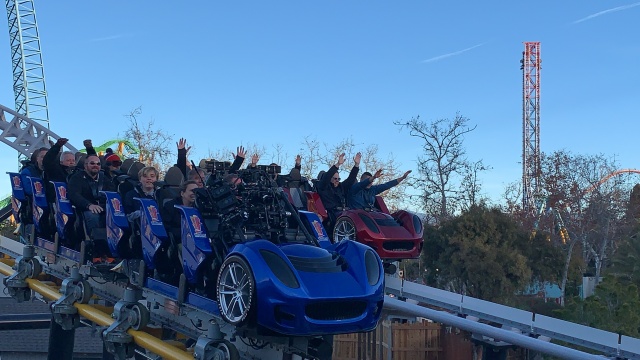 Once you board the stylish race car trains, you line up with the opposing car and launch into the first portion of the ride. A quick launch and you hit the “high five” which completely throws you out of your seat with some great ejector air time. Through the ride, you and the other car are twisting and turning around each other. Sometimes upside down over the other train, very similar to Twisted Colossus. It’s a truly exhilarating experience, especially if you have friends in the other train. After that, you hit the next set of launches which sends both trains into another inversion. 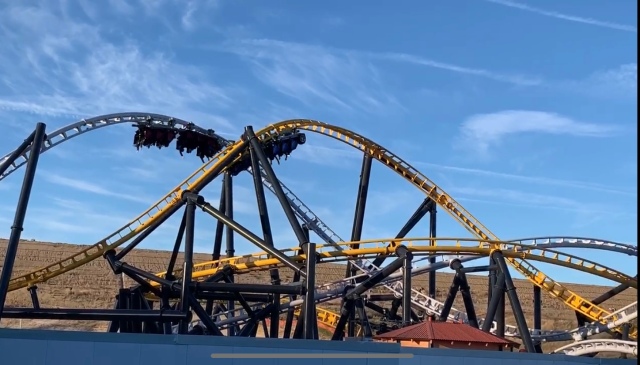 Each portion of the ride gives you plenty of intense G-forces that keep you on the edge of your seat the whole ride. Our favorite portion of the ride was the High Five into the Zero G Stall. It was the moment that made me slam my hands back down the restraints! To be completely transparent, I am not a big coaster fanatic (I am sure you can tell by my use of terminology) and I am certainly not a fan of launches. But this coaster hits all the marks for me. I think if you’re looking for extreme thrill factor, you’ll be pretty disappointed. But I also don’t think this ride was designed with intensity in mind.

My only concern and issue with the ride, is it’s “pit stop” portion. This “pit stop” was created so that the next train can unload and load before it’s dispatched and launched against your train. This is obviously a necessary evil to have a true racing coaster, which is fine. But I truly hope that operations gets this down as fast as possible. Because when you’re sitting in the coaster just waiting to go again, it can get a tad bit boring. Albeit, there is a video screen at the end of the tunnel where CEO of West Coast Customs Ryan Friedlinghaus tells you that the crew from WCC is under your car, tuning it up. You can hear tools being used and many other sound design pieces. But eventually, that ends and you are left to look at minimal set design for the “pit stop”. I think there needs to be multiple screens, music playing and much more set design to really make that break entertaining. As it is, once you launch again, you forget about it. But it’s a minor problem on an other wise fantastic experience.

I find West Coast Racers to be the perfect introductory coaster for those willing to take the next step above the basic coasters. It’s a great introduction into the more intense coasters at Six Flags, rather than just throwing someone straight onto Twisted Colossus or X2. If you want to see the coaster before heading out to SFMM, make sure to check out our ON RIDE VIDEO below!

Not only did SFMM add a new coaster, but they added a whole new section to the park! This new area is called The Underground. The Underground is a LA centric urban-themed area where guests can experience a high-energy street vibe along with new dining and retail locations, including Twin Charged Tacos, Chicken Coupe, Snack Trax, Speed Shop and Six Gear. The area also includes the park’s popular wooden coaster, Apocalypse, and soon-to-open refurbished go karts, Pacific Speedway.

Although we didn’t get a chance to try the new food locations, we are anxious to get back and try it all! Based on SFMM recent history of seasonal food offerings, I have high hopes for the food in The Underground. Something that could be fun in the future, is if SFMM held car shows in this area of the park, it would really bring it to life and add another element of theming.

Overall, we think the addition of The Underground (including retail and food locations) and West Coast Racers fills another much needed vacancy at SFMM. It focuses, not only on creating a fun and thrilling attraction but also creating a themed area with quality food which raises the bar for the park as a whole. Make sure to visit SixFlags.com to plan your next trip or purchase your season passes at a tremendous value.