I been doin’ some travelin’ out ta China lately. It’s been a wild time and I been gittin’ ta see all sorts of stuff.

Fer this here report, I’ma tell ya about ma time over at Chimelong Ocean Kingdom in Zhuhai. Fer those of ya’ll ain’t so sure of geography, it’s in South China, right up ta the water. If yer comin’ in from Hong Kong, ya git off yer aeroplane and turn so yer facin’ due West. Then ya start swimmin’ fer a little while before ya hit land.

This here park was somethin’ else. Fer one thing, the park is like you would picture Sea World back in the day. The park has a whole lotta big buildings fer animals and stuff, but there ain’t a whole lot of rides ta do. But I’m gittin’ ahead of maself. Comin’ in from the front, ya git a great big purdy hotel all themed out ta Penguins! That’s right, ya’ll can git yerself nice a cozy ta sleep with a big ole Emperor Penguin… I think. We didn’t go inside. Fer the actual park, when ya go in, yer immediately gonna see this big ole archway all decorated with fish and other sea animals. On the ceiling of this here archway, they got themselves a big, bright TV screen that shows ya things about them attractions in the park and advertisin’ fer they corporate sponsors. Ain’t nothin’ says China like a great big QR code covering half of yer advertisement.

Down at the end of this here archway, the path opens ta this big lake in the middle of the park. And, ta anchor this body of water, there’s gotta be the largest non-castle Weenie I ever did see. They got theyselves a giant statue of a Whale Shark, which jus happens ta sit in front of they Guinness world record holdin’ Whale Shark aquarium. The statue sure is a mighty fine sight ta see.

Bein’ as how I fancy maself one of them Rolly Coaster Enthusiasts, I had ta git maself a ride on the park’s newest ride, the Parrot Coaster! This here is a B&M Wing Rider themed all around the bright and purdy bird of the same name. The whole area featured a whole lot of them themin’ elements we all like ta see in parks. The coaster itself even goes in and out of a few trenches themed ta a rain forest and such. I mighta been a bit naïve, seein’s as this were ma first B&M Wingrider, but I found it ta be quite the fun time!

The line and how thems chose ta operate the ride was a bit of an odd duck. They had themselves two groupers of a sort. First one was down under the station and only let enough people up onta the stairs that split the line in 2 ta board both sides of the train. Up at tha top of them stairs, another feller (or lady) would hold ya ‘til the gates emptied out, and then would let ya wander on over ta whatever gate ya felt like. And then, when the train went in, the loadin’ was a slow goin’ business. Train come in… Guests git off and git they stuff… ALL guests leave the ride area… and now the gates open!.. Then ya put yer stuff in a cubby… Ya go and take yer seat on the ride… Then some feller (or lady) would walk from front ta back with a camera and take yer picture fer souvenir-makin’… Then the operator checked yer seat… And finally ya got ta enjoy yerself on this fine ride! 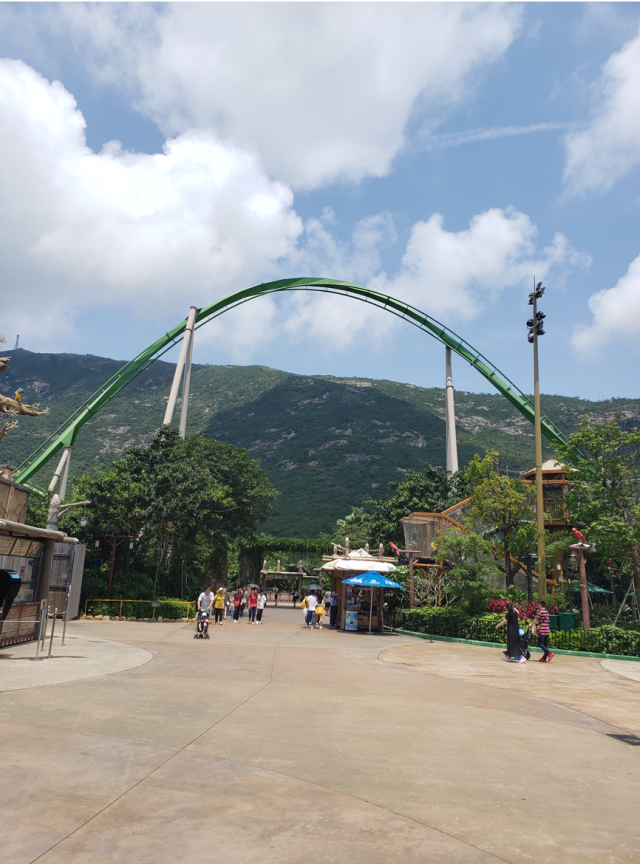 I betcha can’t guess that I only got ta ride jus the one time. As much I like ridin’ Rolly Coasters and don’t always hate them long lines, this operation was a bit tryin’ of ma patience fer a second go round. But not ta fret, as this land marked a common sort of thing in the park, and had a fun little animal exhibit ta go and explore!

After we was done droolin’ over that there Parrot beauty, we went and took a walk over ta the great big Guinness World Record holdin’ Whale Shark tank. And my, weren’t it but a great spectacle ta see this thing. Like any good aquarium, ya gots lots of smaller tanks and such ta lead up ta the big one. Once ya turn that corner and see the giant sheet of glass keepin’ all sorts of big fish from comin’ and sittin’ in yer lap, ya can’t help but let yer jaw drop jus a smidge.

Good ole Betsy was takin’ picturgraphs at this point, and she ain’t much of a picturographer, but she sure did try. Here’s a gander at a coupla picturgraphs showin’ the size of this here thing. 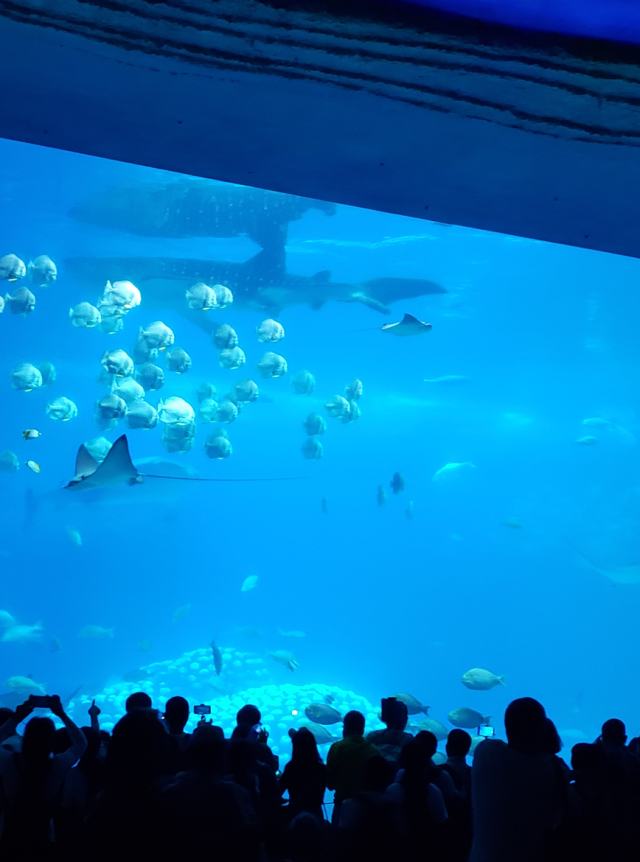 Jus ‘member these here Whale Sharks is one of the biggest animals ta live in the great blue Ocean or in any place really. This tank sure made ya feel them’s bigness, but also, made ‘em feel kinda small. This here tank was mighty big!

Now, I do gotta say that, although the big ole room with the main tank was big and spectacular and such, the entrance and exit weren’t quite so properly thunk about. Ya went from this big ole space ta a little tiny tunnel takin’ ya through another tank. Created a mighty fine funnel effect that helped ta squeeze us all together like so many rocks in a tumbler. Ain’t gonna strike any gold come a fire or any other sort of other rumblin’s.

This here park was mighty purdy, with a good bit of themin’ inside the park ta give ya a sense of each different kind land ya were explorin’. If it were in the Polar area, ya got ice and snow and such, and if ya stumbled inta the magical land of Mount Walrus, ya got giant Walrus tusks in the side of a cliff! Ma favoritest bit of themin’ in the whole place was this buildin’ that was all themed out ta be about Vikings and such. Even had a big ole Dragon up on top. But inside the buildin’, there was a ride called the Polar-Go-Round. It was a different kind of version of them Teacup-typa rides where ya try and spin as fast as ya could ta try and make yerself and everybody else git rid of they lunch. Ole Betsy weren’t up fer that, so we only watched it run fer a bit.

All the same, this here themin’ on the inside and outside of the buildin’ jus weren’t workin’ ta be one thing. Mighty Vikings with a certain kinda scenic stylin’ jus weren’t goin’ along with the silly, simpler ocean and snowflake look on the inside with the ride. Silliest part fer me was pointin’ this out ta one of the locals that was actin’ as ma tour guide. She jus didn’t see the problem until I pointed it out. I reckon that’s a right little nugget fer them designers ta know when they go and stick an eye right up ta the thing they buildin’. Most fine folks jus don’t don’t see these here “errors” unless ya go and point it out. 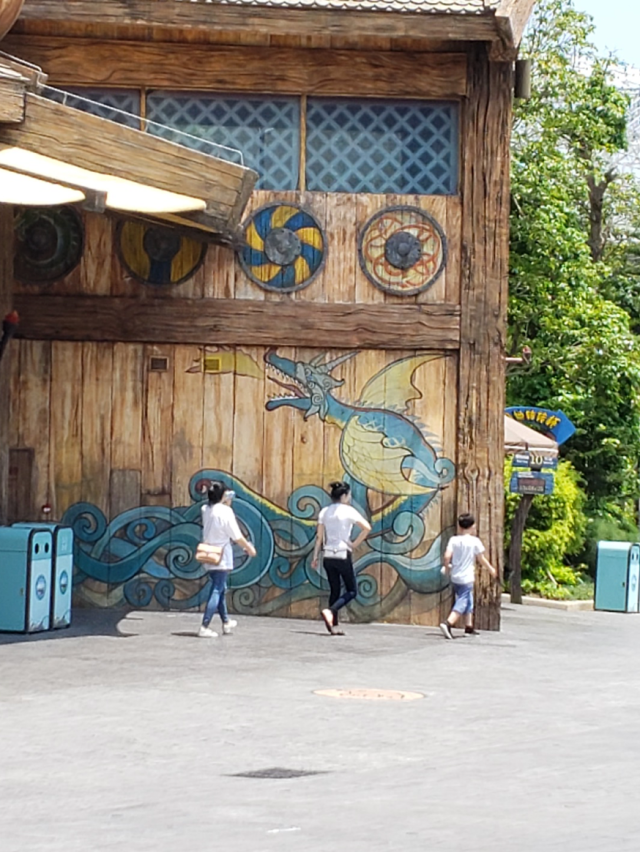 As this here blog post is gittin’ a bit long in the neck, I’ma talk about one last thing in this here park. Chimelong Ocean Kingdom had this here 5D theater in a corner of the park. As it were a 5D theater, I wasn’t all that keen ta takin’ a gander, but we was over in that area and it startin’ soon.

Well, I’ll tell ya what. I ain’t never seen a ride so completely tell the story of the park it sits in quite like this here ride did. Mind ya, this here park had all kinds of themes that was jus a bit odd, like Mount Walrus and Hero Island and Polar Horizon. I mean, they all was fine in they own rights, but they was a bit headscratchin’ fer how they all was ta work together in the park. This here 5D theater explained all of that!

You was flyin’ along with the mascots of the park, Kaka the Tiger and Kiki the Tiger, and was goin’ on a grand adventure that hit every major land in this park! On the surface, it was a bit of a standard typa adventure. But jus ta take ya inta so many parts ya seen earlier in ya day walkin’ around, I figured it was a might bit clever fer really showcasin’ the park and such. It even made ya understand why this here Parrot was such a perfect platform ta make inta a high fun rolly coaster!

I’ma end with this here animated Bear makin’ a mighty fine sword. Cause jus why wouldn’t this feller be makin’ it!?

Thank ya kindly fer followin’ along. I reckon once we weather this here COVID-19 thing, I’ll git ya some more stuff’s fer showin’ in the great Far East! Fer the time, ya take care of yerselves!