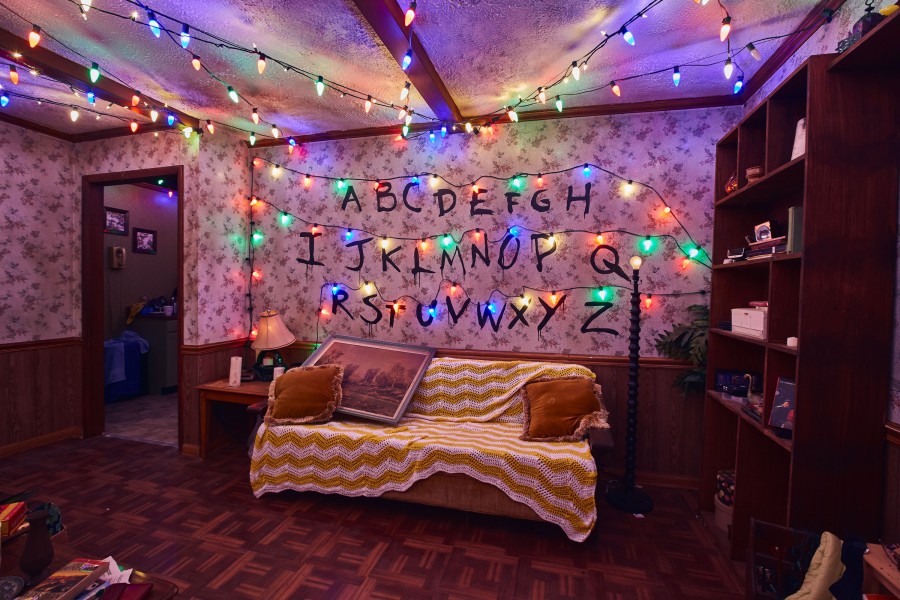 Stranger Things fell onto the pop culture world like a ton of bricks, in the best way possible of course. With it’s imaginative storylines, compelling characters, fun settings and creepy monsters; it was only a matter of time before it became a REAL LIFE experience at Halloween Horror Nights. It has all the working pieces to become a classic maze at the event that can truly bring these shows to life on a nightly basis for guests.

TODAY, Universal Studios has released some incredible images teasing the new attraction for this years event, and they are nothing short of stunning. If this has your mouth watering for more, stay tuned here for something truly special. We had the wonderful opportunity to have a Behind The Scenes Tour of Stranger Things at Universal Studios Hollywood with Creative Director and Producer of Halloween Horror Nights, John Murdy. We will have the recorded walk through (with some bits edited out because of SPOILERS) so you can hear first hand the hard work and dedication that went into meticulously recreating the world of Stranger Things. Without getting too detailed, the maze this year is going to be something truly special and shouldn’t be missed.

In the mean time, below are the juicy details and some incredible photos of Stranger Things!

For the first time ever, Universal Studios Hollywood, Universal Orlando Resort and Universal Studios Singapore are partnering with Netflix to bring “Stranger Things” to life at their “Halloween Horror Nights” events. Each park will feature its very own maze that will give guests the chance to brave the Upside Down and encounter iconic scenes, characters and environments from season one of the critically-acclaimed series.

The images showcase some of the eerily-authentic environments guests will encounter at “Halloween Horror Nights” 2018 – including the Byers’ living room adorned with an erratic display of flashing Christmas lights, Hawkins National Laboratory in the Upside Down, Will’s makeshift fort called Castle Byers and more.

When tourists (or even locals) visit Universal Studios Hollywood, they expect to see a bit of the glitz and the glamour that is Hollywood. Now, at HHN you can experience it! All new this year at Universal Studios Hollywood for HHN, is their RIP Tour. This one of a kind experience gives you so many privileges and perks that it will make your head spin like Regan from The Exorcist! Want to feel like you’re getting the movie star treatment, then you MUST get the RIP Tour! Below is all the information you’ll need to know before clicking the link to purchase those tickets!

Each R.I.P. Tour accommodates groups of 12, making it ideal for large parties or smaller mix-in groups. Highlights include: 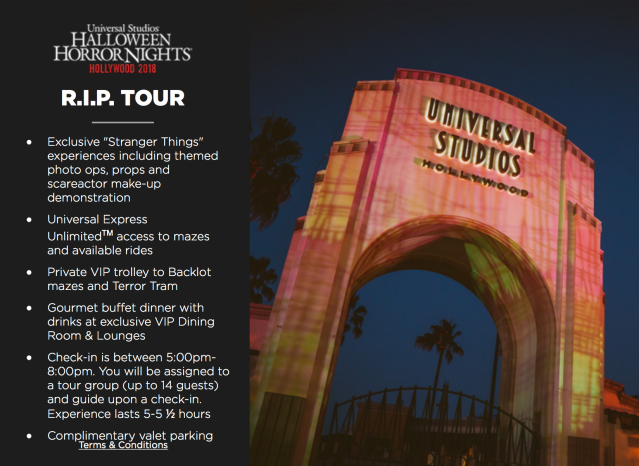 With this years incredible line up of recognizable and influential IPs (Intellectual Properties) brough to life, RIP will be the way to go! This year’s terrifying line-up includes:

2 thoughts on “ALL NEW R.I.P. Tours and A Sneak Peek Into STRANGER THINGS at Halloween Horror Nights”