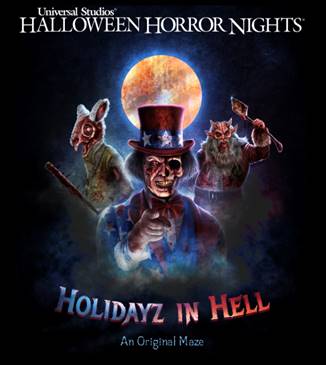 Of all the news that could have been announced at Monsterpalooza, this makes us the happiest. Ever since La Llorona and El Cucuy, we’ve been dying to have an original maze BACK at Universal Studios Halloween Horror Nights in Hollywood. John, Chris and the entire team truly set the bar high with their past original mazes, but I have the utmost confidence in their ability to deliver. With the incredible popularity of the “Holidayz In Hell” scare zone last year, it was only right that it became it’s own full fledged maze. We are beyond excited to step into the demented holidays we know and love. Below is more information regarding the exciting announcement for HHN.

From New Year’s Eve to Valentine’s Day, from Easter to the Fourth of July and from Thanksgiving to Christmas, Universal Studios Hollywood adds a demented twist to life’s biggest moments in the all-original Halloween Horror Nights maze, “Holidayz in Hell.”

Inspired by the popular scare zone of the same name, the “Holidayz in Hell” maze will feature an original score by Electronic Music Artist and Producer Figure and offer guests new reasons to dread the holidays.  A tortured Tunnel of Love, inhabited by a crazed Cupid on a quest for hearts to break or take will make this Valentine’s Day anything but romantic; an unhinged Uncle Sam will create a sinister July 4th killerbration; treacherous turkeys will gobble, gobble an unsuspecting family; and a sick Santa will adorn Christmas Trees with human body parts, with many other milestone killer holidays.

Ah, the Holidayz from Hell have arrived.  Those who survive the Holidayz need not let down their guard just yet as a creepy Christmas-themed scare zone with additional frights awaits to fill beating hearts with holiday fear. In addition to the music of Figure, who previously created a series of original sounds for Halloween Horror Nights, guests can expect to hear a new rendition of their favorite holiday tunes, remixed to accompany this hellish new maze.