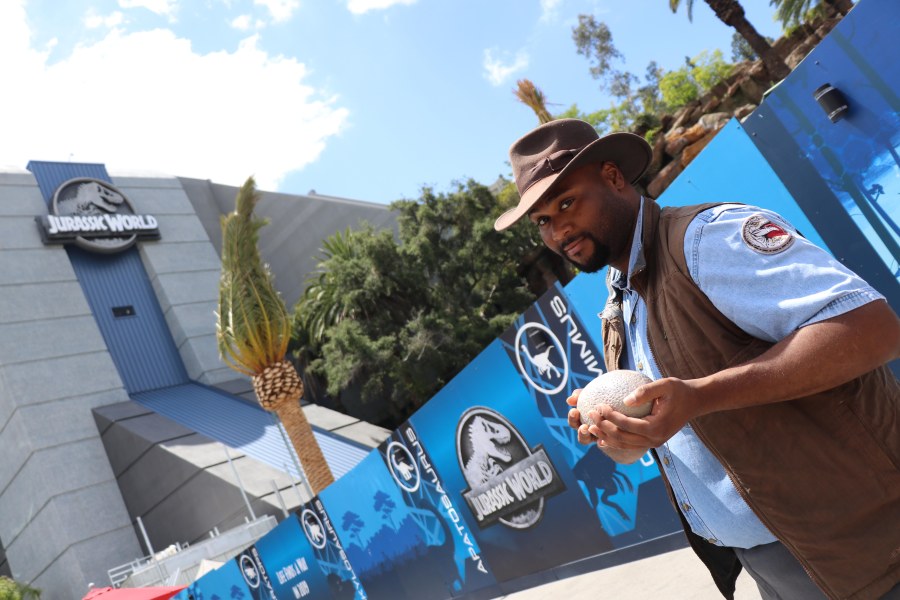 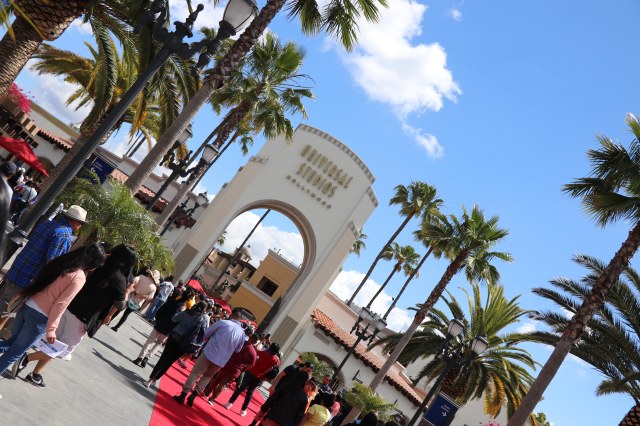 It was an absolutely beautiful day at Universal Studios Hollywood this Memorial Day! The sun was out, the sky was blue and it was the perfect day to visit a theme park. Luckily for us, USH is essentially in our own backyard and we knew we had to come out and see the progress on some of the major construction happening around the park. USH has been transforming itself in recent years, and it’s incredible to see the changes that have occurred and the ones in the near future.

There are a couple different construction projects happening around the park currently. With this Visit In Pictures, we will visit them and see the progress!

The Secret Life of Pets: Off The Leash (Upper Lot) 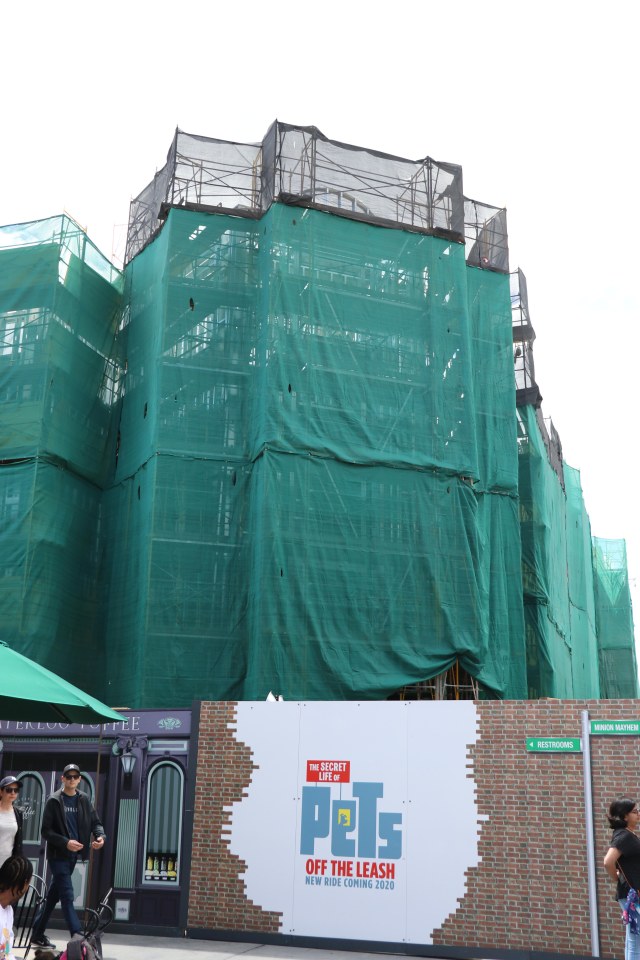 The Secret Life of Pets: Off The Lease (coming 2020) seems to make major progress each time we visit the park. It is the most notable piece of construction since it sits right on the upper lot and now keeps guests from using Baker Street as a way to approach Minion Mayhem. 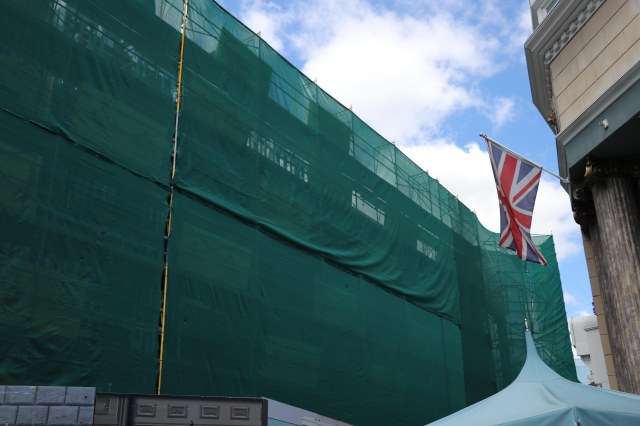 If you look close enough through the scaffolding, you can start to see the facade take shape. Small rectangular openings, soon to be windows, line the facade from top to bottom. 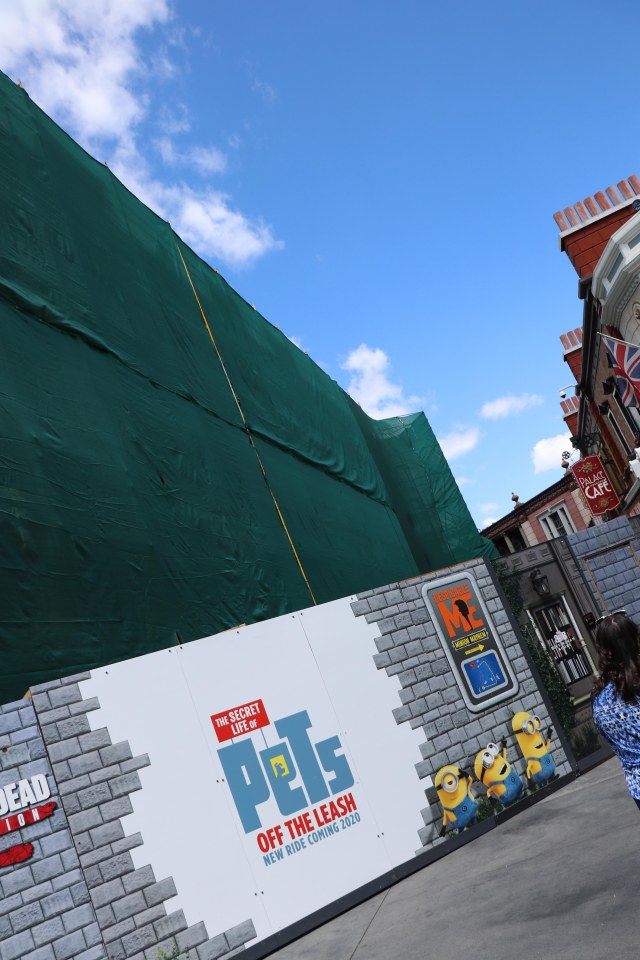 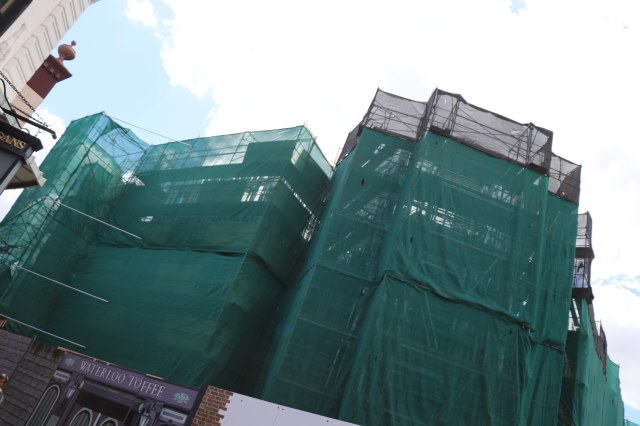 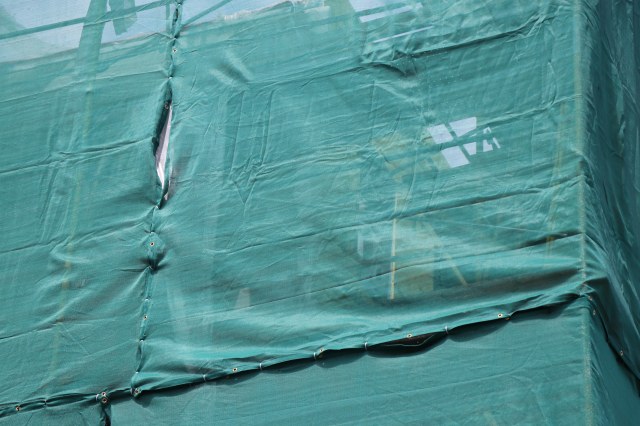 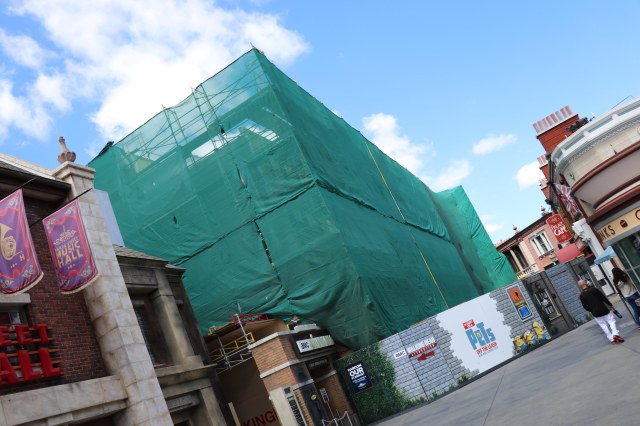 It will be nice to have another attraction on the Upper Lot since the trio of attraction on the Lower Lot are such heavy hitters. Very excited to hear more details regarding this attraction.  The only question we have as of now is if the crashed helicopter will return after the construction is done! 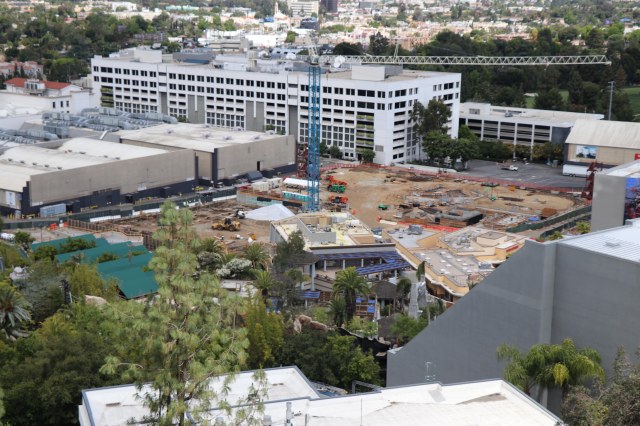 This construction is in it’s extremely early stages, as you can see by the photos. 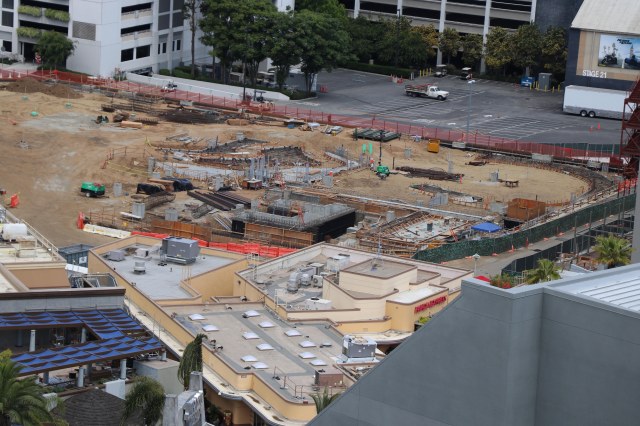 In the photo above, this is the rumored area for the Mario Kart attraction. Recently some other bloggers have noted (from aerial photography) that you can see the vague track layout for the attraction. 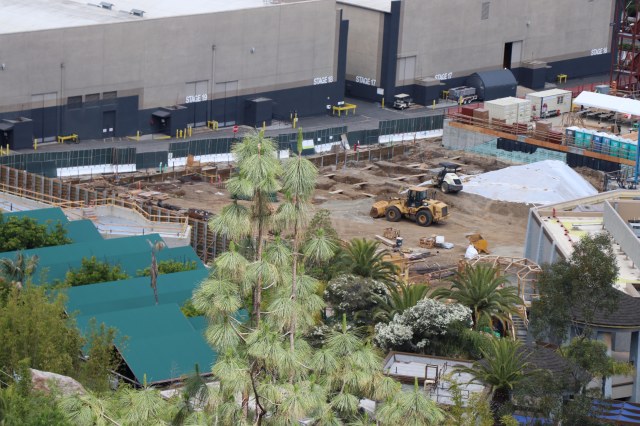 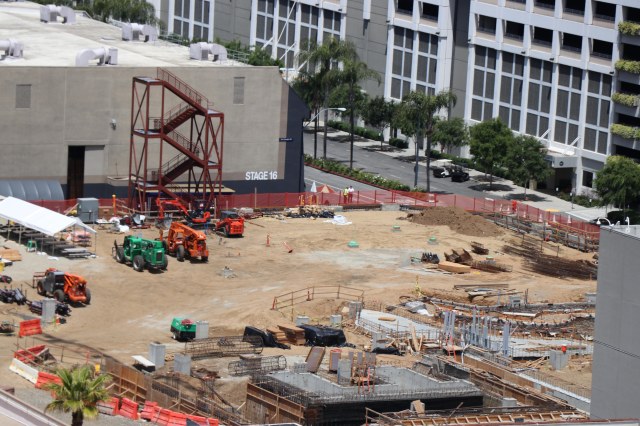 The construction has gone vertical…with stairs! 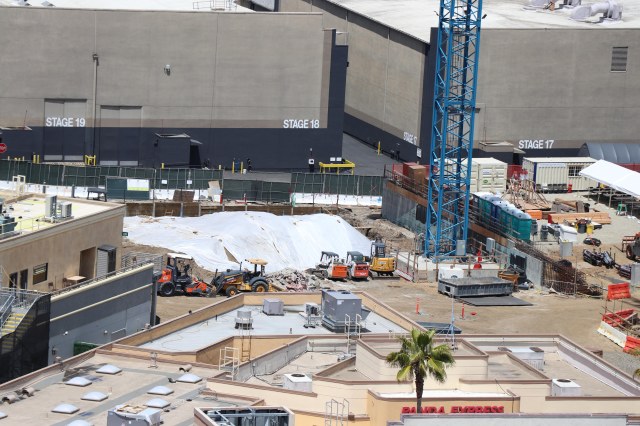 Not much to see currently, but it’s still very exciting to see a new section of the park take shape before our eyes! It won’t feel like to too long before we actually start to see true vertical construction and actual theming. 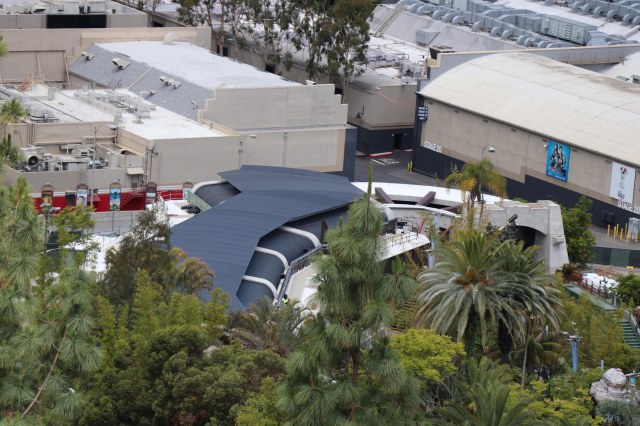 Very much on the opposite side of the spectrum, the construction for Jurassic World: The Ride is nearing completion and the ride has already been testing! 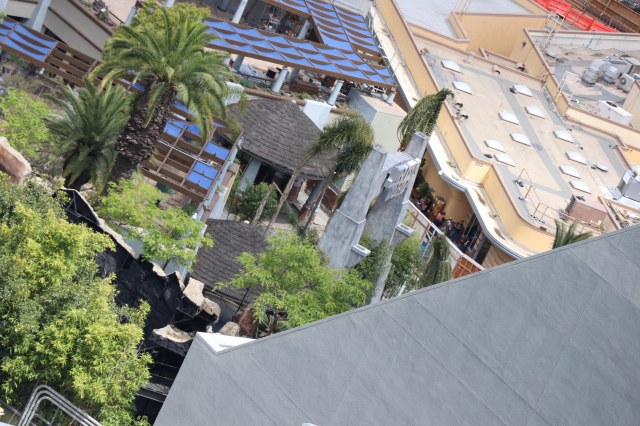 If you look closely at some of these photos, you can see construction workers in yellow/orange vests making the final tweaks to the attraction. 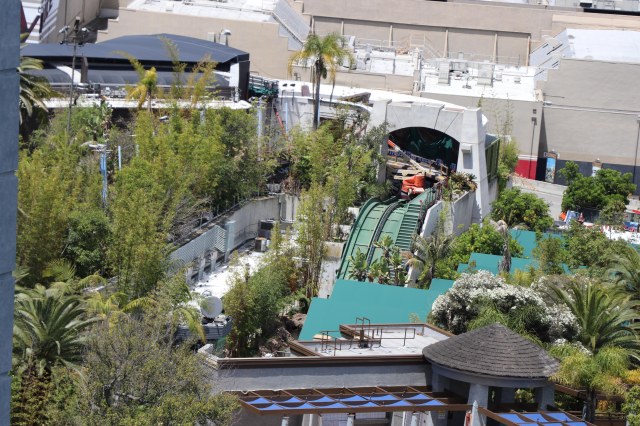 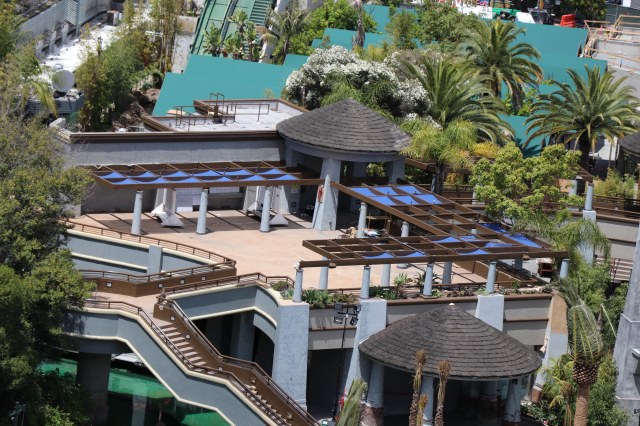 The new grey and blue color scheme seems to bring a much needed update to the surrounding area. We particularly love the bright blue awnings in the extended queue/additional outdoor eating area. Let’s hope that when they do fade, they replace them quickly. 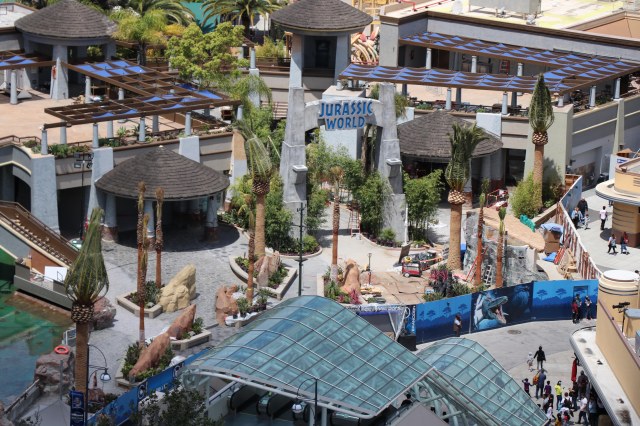 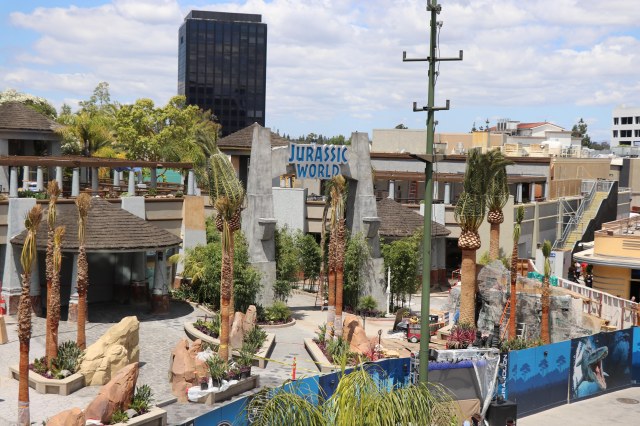 As you can see, the rock work isn’t completely finished yet, but it’s very close. 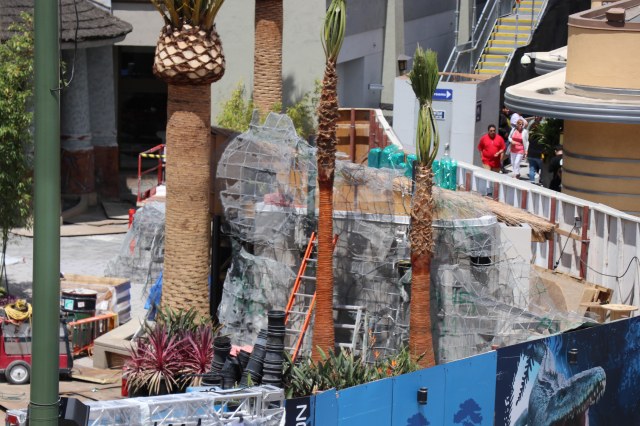 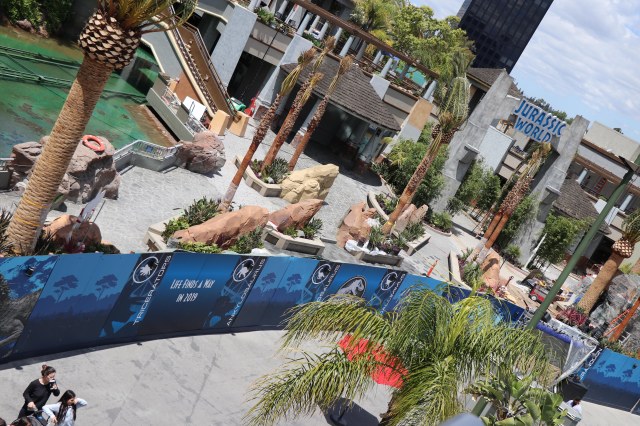 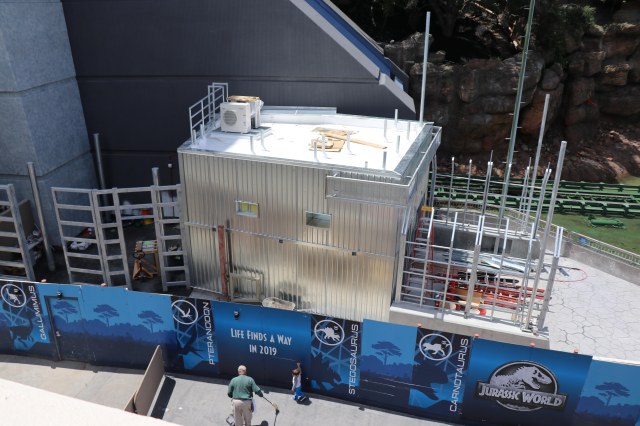 This seems to be the new permanent Raptor Encounter facility where guests come face to face with their favorite Raptor…BLUE! This sits right at the bottom of the drop for the attraction. It’s going to be mighty loud in here every 30 seconds or so. Unless we are completely wrong and this is NOT the new Raptor Encounter building. 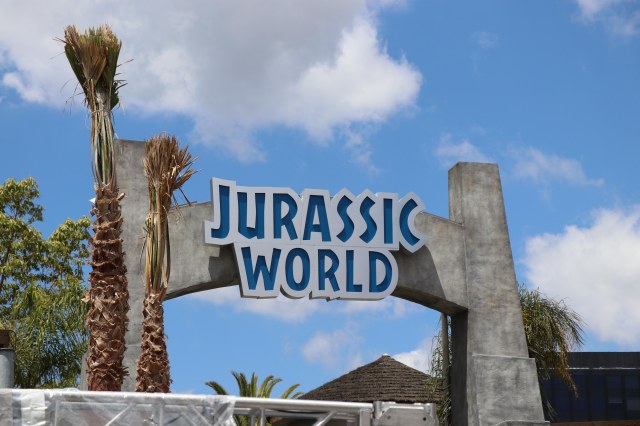 Against a nice blue sky, the new archway is really beautiful. 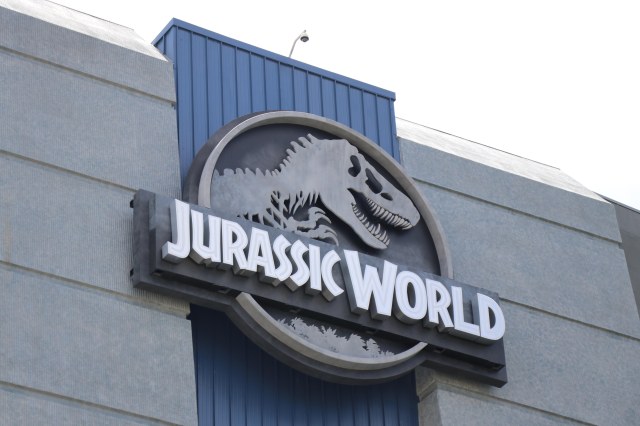 They’ve even added Jurassic World to the top of the main show building. It seems like a minor addition, but it really does change the feeling of the area. Previously, the building was themed minimally to an InGen owned facility. This was one of two rival/competing science companies from the book. They were mentioned in the original Jurassic Park film, but played a much less prominent role. 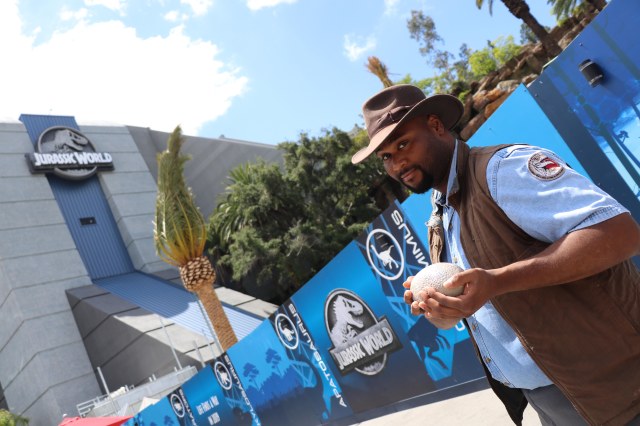 In front of the construction walls, Universal has placed a TM holding a dinosaur egg for guests to hold in a photo. 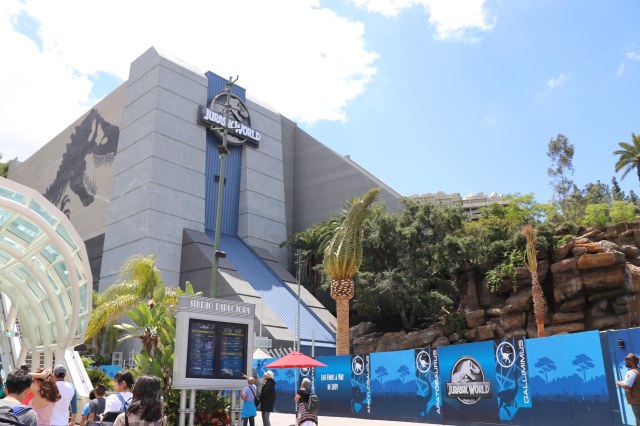 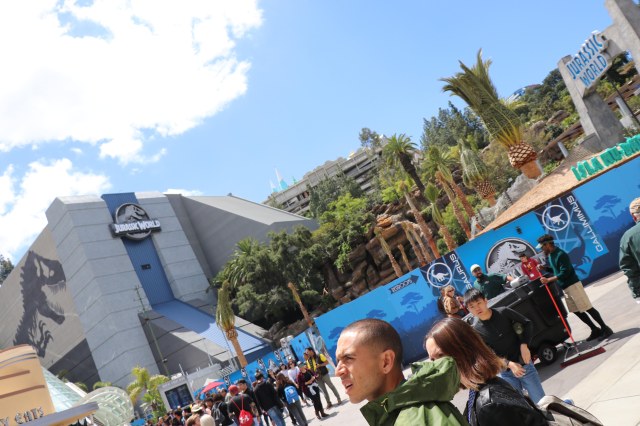 We are very excited about the changes coming to this classic attraction and will be there opening weekend to experience it for ourselves. The wonderful new color scheme and re-designed entry way for the attraction really sets itself apart from the rest of the lower lot. Now that there is such a stark difference between JW and the other two attractions, we would love to see the facades and buildings get some love to help make the lower lot feel a bit more cohesive. 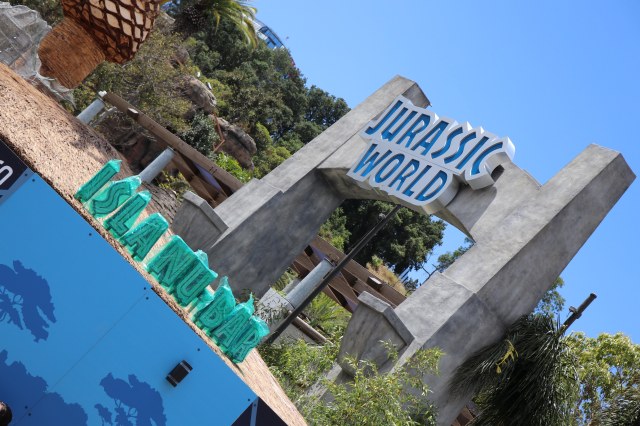 You must be…KLOWNING…around if you thought we wouldn’t include any Halloween Horror Nights construction photos. 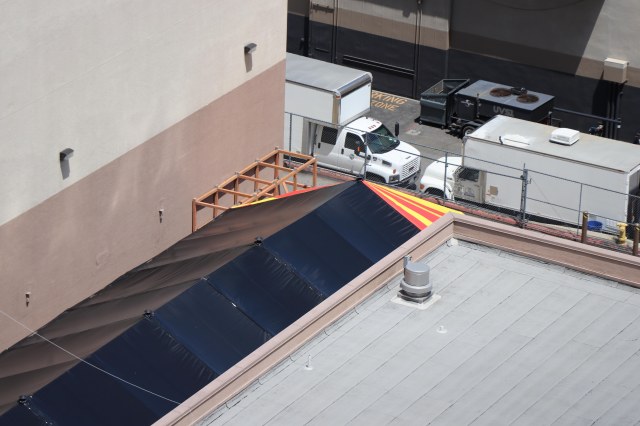 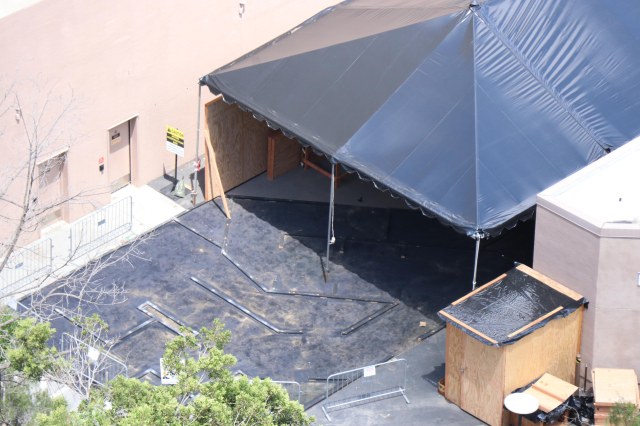 We hope you enjoyed coming along a construction tour of USH!

Let us know, are you excited about the coming additions and changes to Universal Studios Hollywood? Which are you most excited for? Let us know on our social media by following us @ThemeParkDuo on twitter and Theme Park Duo on Facebook.