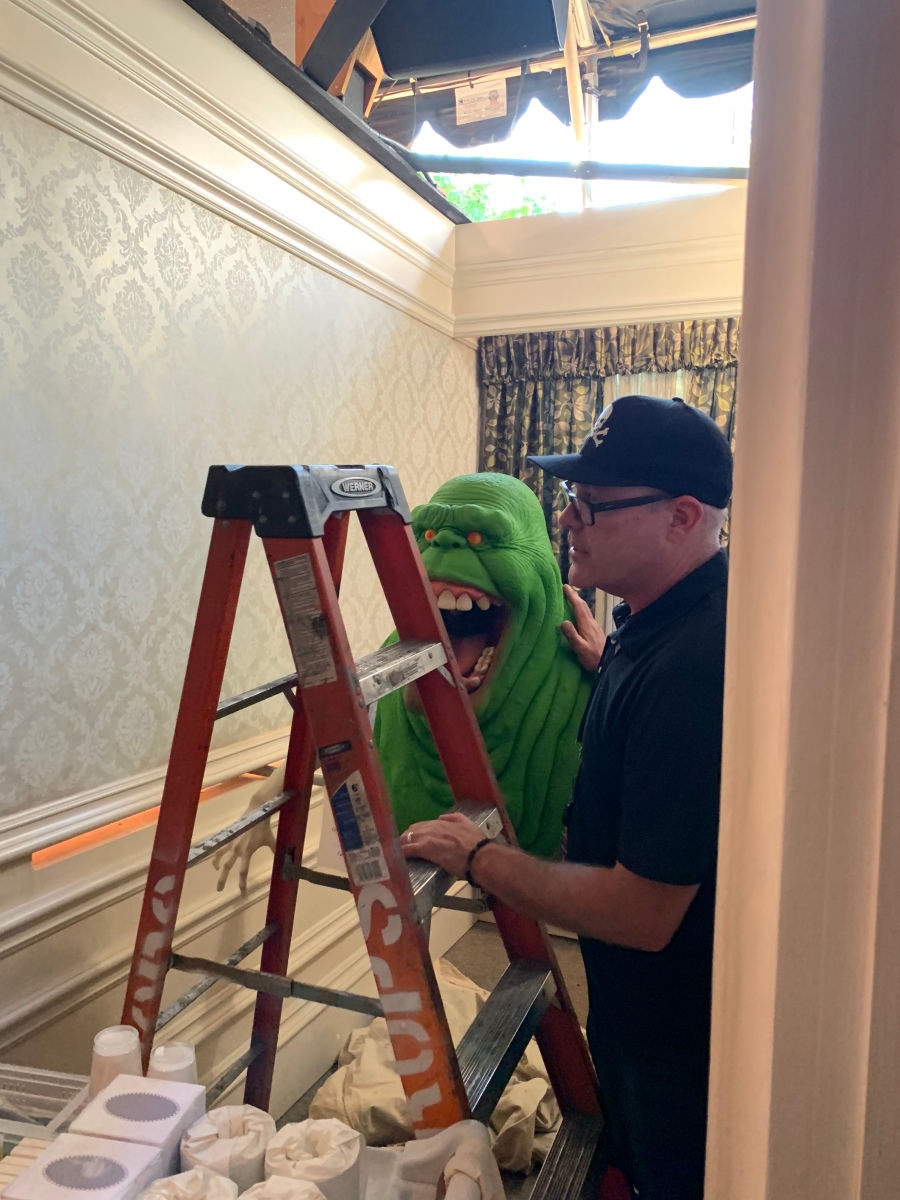 Halloween Horror Nights is the place to go when you want to step foot into your favorite or scariest horror film. Universal Studios recreates these iconic films like no other event and terrifies its guests year after year. We were thrilled to receive a lights on tour of three of the mazes from this year’s Universal’s Halloween Horror Nights. Being able to see all the details close up without having to worry about getting scared really allows us to appreciate the true artistry that goes into creating such experiences. We went through Killer Klowns from Outer Space, Creepshow, and a guided tour of Ghostbusters from Creative Director John Murdy. 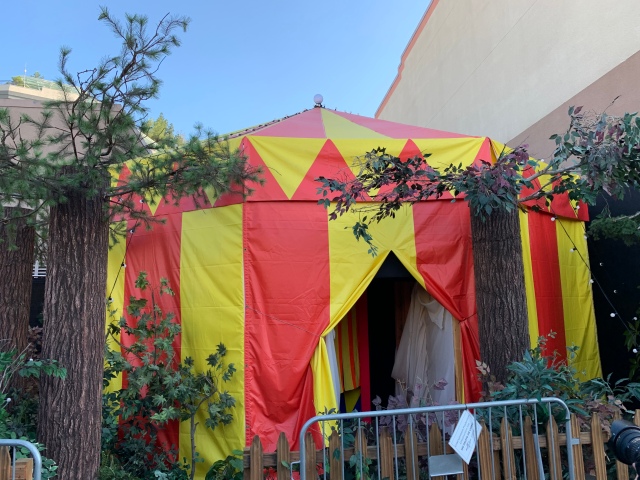 Our first stop was Killer Klowns located in the overflow queue for Revenge of the Mummy: The Ride. A lot of this maze was still in the construction phase, so we unfortunately didn’t get to see as much as we would have enjoyed. However, we could certainly tell that the wacky and zany spirit of the film certainly comes through. From our interpretation, it appears as though guests to the event can expect to make their way through the plot line of the cult classic 80s film with plenty of room for cotton candy and popcorn themed scares. The facade begins with the iconic circus tent in the woods and a performer playing Farmer Gene. Guests are transported via disorienting neon hallways onto the bizarre Klown themed space ship. 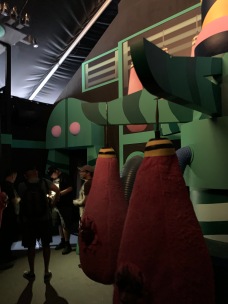 Iconic scenes from the film follow around the town of Crescent Cove including Debbie’s home, the police station, and of course a climax in the local amusement park. 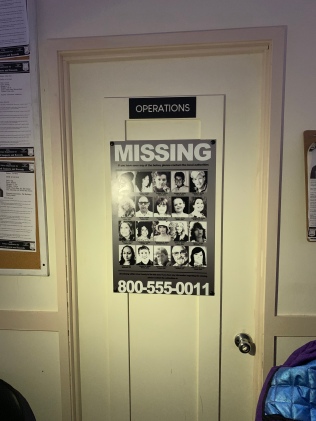 Haunt fans will want to keep an eye open in the police station for some recognizable missing persons! This maze looks to carry on the wacky scares of the original film with bright colors and gruesome fun! 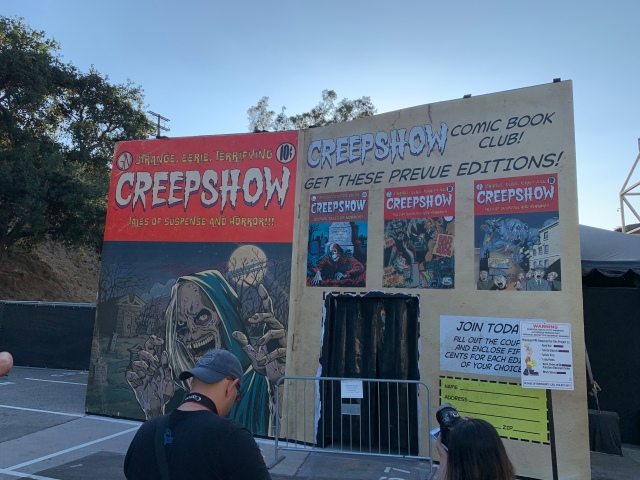 Creepshow—located on the back lot—is inspired by the 1982 film and running in conjunction with the upcoming reboot. This maze bares its comic book anthology roots on its sleeves as it transitions between the 5 different Creepshow stories it’s based on. 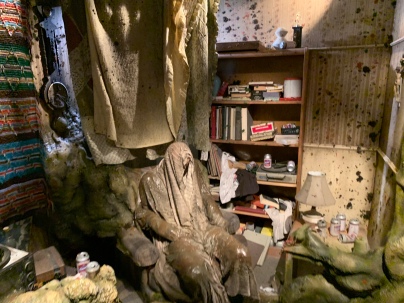 Guests can expect to see scenes from Father’s Day, The Crate, They’re Creeping Up On You, Gray Matter, and Bad Wolf Down. Three of these are from the original films and two others are from the upcoming reboot. Each section carries very obvious tone changes and are well defined. Guests are even treated to a title card of sorts for the different short stories as they’ll walk past the comic book cover for the respective short stories as they enter them. We’re looking forward to a wide array of scares and ghoulish scenes from this maze!

Finally, we were treated to full tour of Ghostbusters with some awesome insights about the technology and creative inner workings. This maze is truly going to bring a classic film to life! John even explained that both Reitman’s have had some input into this maze and are truly excited to see it. 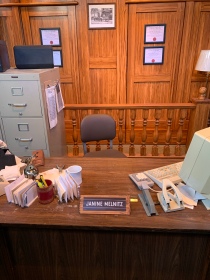 We could immediately tell that the unique blend of comedy and horror elements are going to shine through in this maze. John spoke a little about this blend during our walk through and the unique challenge it’s posed. He stated that this is really the first time they’re doing a maze based off of a property that’s a comedy first but carries some horror elements. But, he finds the marriage between comedy and horror a fascinating one that he’s excited to explore.

“I always park myself at the exit of a maze and just watch them. Because you can get a really quick gauge on how they’re enjoying the event. And I’ve noticed something over the years. They come out screaming, and then five seconds later they’re laughing. So there’s always that fine line between that physical release you do when you go through something that’s really tense.”

With that in mind, he really wanted to make sure that the comedic spirit of the film came through, but didn’t short any guests on scares. Therefore, they’ve really crafted the maze with distinct areas that are almost presentational to evoke the iconic scenes and comedy with impressive effects and actor’s performances. This is then followed by areas where the scares will come hard and fast. As a good example, guests will be treated to the iconic fire station outside and Louis Tully as the Keymaster interacting with guests. We were clued into the fact that guests will want to pay attention to Twitter as a proper response to Tully could net fans a special souvenir! They’ll enter to the beleaguered secretary spouting some iconic lines at the front desk to the Ghostbusters and Egon interacting with her.

Murdy explained that to help sell this they’ve given performers more power to over their lines and performance than they ever have before. This is sold particularly well by giving the performers the ability to press buttons for different effects and lines. Murdy explained that this is more power than they’ve given performers before and should really allow these scenes to pop—especially considering the level of effects that has obviously gone into this one. Guests will be treated to some iconic scenes with some truly phenomenal effects from the Sedgewick Hotel and Slimer, to the library, and Dana’s apartment. Scenes of some ghosts getting hit with the proton packs will even play out for attendees! Guests will want to keep an eye open for one of the largest scenes John claims they’ve ever done at the end of the maze. When I first saw it, I literally quoted Venkman in my mind—“Well there’s something you don’t see every day.” This maze truly brings scenes from the film to life!

However, that doesn’t mean that horror fans or fans of the subsequent Ghostbusters films should feel left out! Murdy explained that they still wanted to create plenty of scares for guests and they ended up pulling from all sorts of pieces of the Ghostbusters universe. In the subsequent scenes, they decided that putting guests in the spirit realm could create all sorts of spooks. But, they needed a way to get there while staying true to the films. Murdy explained:

“I pitched this to Ivan Reitman and his son Jason, who’s doing the new movie. I went, ‘Okay. In the original draft for Ghostbusters that Dan Akroyd wrote, there was a scene—this is the level of research we go to—where there was a camera that allowed the Ghostbusters to look inside and see what the ghosts were doing when it started to get really crowded. It ended up just being one of those things they cut when they did the movie. I want to go inside. I want to go in the Containment Chamber…What I liked about it was that it allowed us to get out of the real world and into the spirit realm and that becomes a theme in this maze.”

They even ended up borrowing an idea from the video games! In the video games the slime can actually create portals into the spirit realm. Murdy explained that they utilize this narrative idea to bring guests between presentational scenes to “dark environments set up to scare you.” This break in scenes brings guests into the dark spirit realm where they can expect to be haunted by the Scoleri Brothers from Ghost Busters 2 and other scary, but iconic, demons from Ghostbusters, Ghostbusters 2, and Ghostbusters 2016. Murdy shared some of the masks for these ghosts and they truly look like they’re straight from the films! Subsequent scare sections feature large Terror Dogs that John described as very similar to the werewolves from the “An American Werewolf in London” maze from a couple years ago and a particularly nasty run in with Gozer. It’s clear that this maze will still deliver on the hard scares!

Our Ghostbusters walk through with John gave us a really great glimpse into this maze. We’re truly excited to fully jump into the movies with some well fabricated scenes and effects that will be awesome to see during the event! This year’s lineup is shaping up to be a really great event! The 80s theme appears to be playing throughout. All three of the mazes toured were based off of classic films from the 80s. They’ve also just announced that Thursdays will be Throwback Thursdays with an 80s theme and 80s rock band playing. When questioned where the 80s theme came from, John mentioned that he felt like perhaps Stranger Things has popularized the era at the current juncture point. From what we were able to tell guests can look forward to a horrifically good time at Universal’s Halloween Horror Nights this year with plenty of scares and spectacular effects to go around!