For us SoCal folks, it’s felt like forever since we’ve been able to step foot onto Universal property. Since the beginnings of COVID-19, Universal closed Citywalk and its park in order to keep people safe. On June 11th, Universal Studios started it’s phased re-opening of Citywalk just as their East Coast counter part had already done. The limited hours of operation at Citywalk Hollywood are 12pm-8pm daily and you can find what store locations are open on the Universal Studios Hollywood App.

We were eager to go back to Citywalk and also see what rules and regulations were implemented in order to keep guests safe and healthy during this unprecedented time. 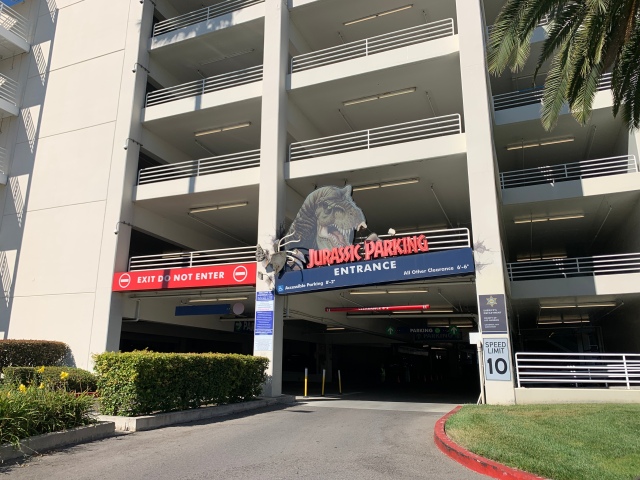 One thing that was welcomed was the complimentary parking. Normally Universal charges guests to park to visit Citywalk, but because of the large amount of stores still unavailable, they are not charging. As you go to find your parking space, you’ll notice that orange cones have been placed in every other parking space in order to keep people socially distant while parking. 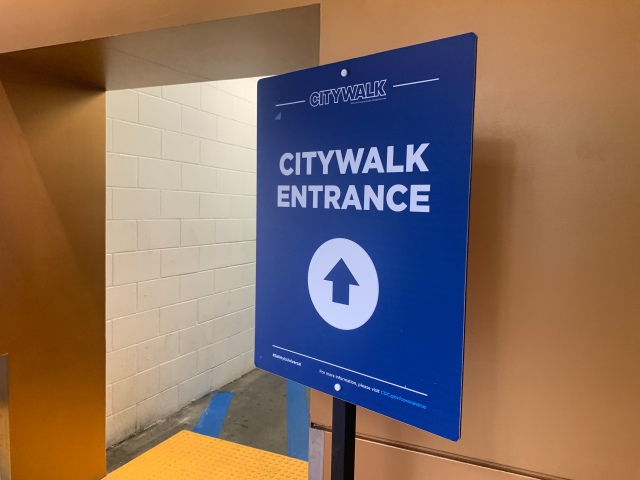 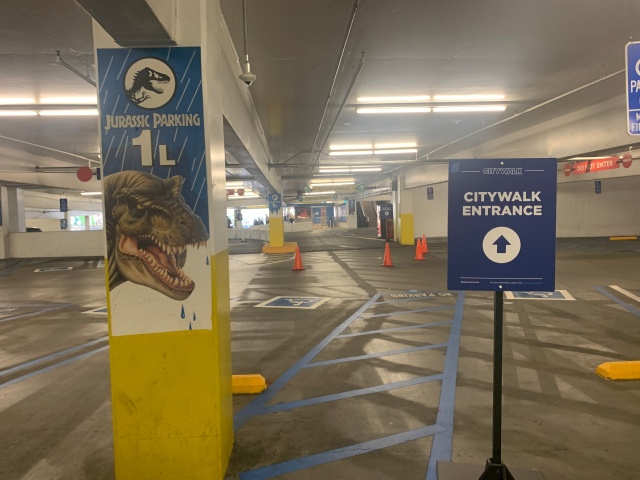 The normal entrances to Citywalk have been blocked and are guarded by security. Instead, you follow the arrows on the floor and on the signage to a newly established temperature check. This currently exists on Level 1 of the Jurassic Parking Structure. I was personally thrown off a bit, mainly because I’m so use to just waltzing into Citywalk. As you approach the temperature check location, there is a rather large sign (so nobody can claim ignorance) that explains very simply what important information guests need to know for their visit to Citywalk. To simplify it: you are required to wear a mask, you are required to have your temperature taken (anything below 100.4 degrees Fahrenheit is okay), you’re encouraged to frequently wash your hands with soap and water and you are highly encouraged to stay social distant (6ft or more away) from other guests. As you can see, Universal has also provided plenty of hand sanitizer stations throughout Citywalk as well. According to the CDC, this is not a replacement for hand washing, but a good thing to have in case you don’t have the opportunity. 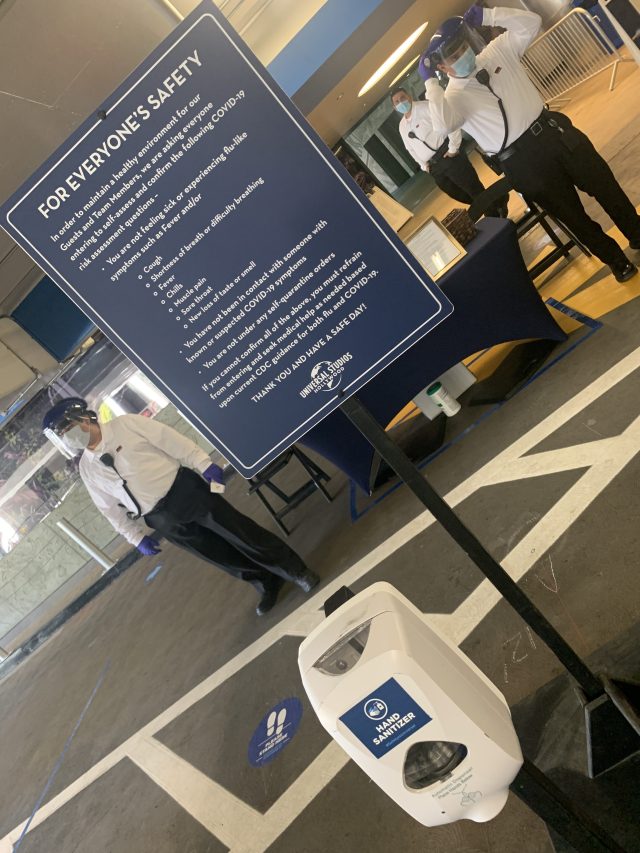 Other than the very clear temperature check and potentially being reprimanded by a Universal TM, most of the guidelines and rules are running off the honors system. Universal assumes that if you have flu like symptoms or have interacted with someone with COVID-19, then you won’t be visiting. This is on signs as well, but should honestly be expected to be ignored. People will visit regardless, which is why masks are so important to the experience.

After you get a touch-less temperature check done, you are then allowed into Citywalk to roam around. Most stores were closed, with the acception of a few food locations and Tilly’s. We did peek inside the Universal store and spotted some Secret Life of Pets: Off the Leash merch sitting at the entrance of the store! Exciting to potentially be riding that brand new attraction very soon! 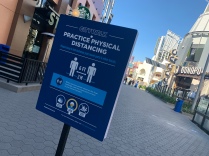 I was actually impressed with how many signs were placed in Citywalk. They even had signs in the planters and on benches to really make sure people can see them. On this particular day, staying 6ft away from other guests wasn’t too difficult because there simply wasn’t a ton of people. It was actually a ghost town! An odd sight for one of the top places to visit in LA.

I won’t lie, walking up to the gates with absolutely nobody around was a very emotional experience. Just being back and having plenty of happy memories flood in was a tad overwhelming, but much needed. At the entrance of the park (and throughout Citywalk) Universal has added a new announcement that talks about the new guidelines and rules when visiting.

We wanted to check out the eating situation before we left and saw that there were come changes implemented to keep guests safe. 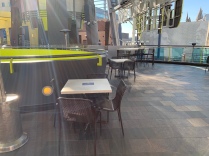 Tables were moved to stay further away from other tables. And a sign was added to each table notifying them that only 1 group would be allowed at each table. Outside of food locations ( Popcornopolis, Vivo and others) you can see how they plan to deal with lines. Sometimes lines will get long and it looks like they plan to keep guests separated while waiting.

While we were taking our photos and scoping out the new situation, we saw plenty of Universal TM wearing white vests that said “Clean is Universal #SafteyisUniversal”. They were cleaning down tables, railings, and literally anything people touched. Now regardless of whether this is “COVID Theater” or note, it is nice to see TM beings extremely thorough with their cleaning habits. We will see how that continues while Citywalk continues to open its stores and eventually the park.

Other than the updated saftey measures, the only other notable news is the construction of Toothsome’s Chocolate Emporium and the NBC Sports Grill and Brew. There doesn’t seem to be much progress on the exterior of the building for Toothsome’s, but we are certain there is plenty going on inside.

A massive screen was added to the outside of the new NBC Sports Grill and Brew. Something  that immediately drew our attention and will be a nice addition to the area. 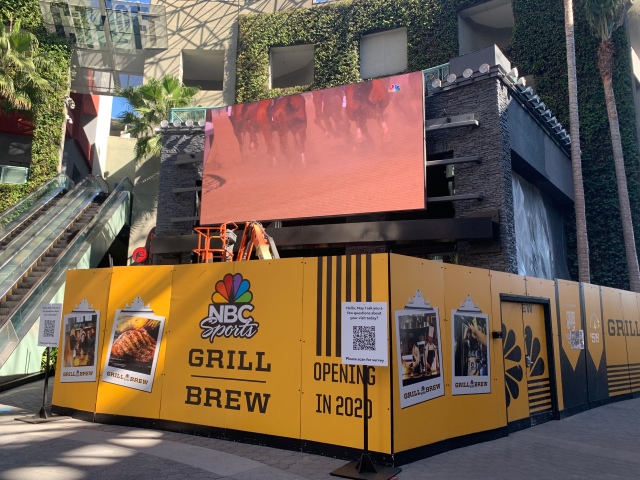 As with Universal Orlando Resort, Universal Studios Hollywood really seems to be taking each and every preventative measure imaginable to keep their guests safe and healthy. This was day one of opening, so there were a handful of things that we think could be improved or changed to better assist guests. One thing we noticed was the lack of visibility of the hand sanitizer stations. Some were placed on the outskirts of walk ways and some in the middle. We think it would be much more helpful if there was clear signage and they were moved to the middle of the walkways. We also didn’t notice a lot of Team Members waking around making sure people were adhering to the new rules. Although like I mentioned before, this was day one and there simply weren’t a ton of people. For us, having a presence at Citywalk would help remind people to keep their masks on and prevent them for wanting to break rules.

When it all is said and done, only time will tell if these rules and regulations will be helpful in deterring the spread of COVID-19 in LA. Of course, the responsibility doesn’t simply land on the shoulders of Universal, but the shoulders of those willing to go. Everyone needs to remember how important it is to wear a mask and how it will help everyone stay safe. Everyone needs to play a part in keeping LA healthy. But for a start, we think Universal Studios Hollywood is headed in the right direction. We hope as things continue to open up, rules will not become more lax. We’ve already seen instances of UOR becoming more lax on their newly appointed rules and regulations. I hope that USH learns from their mistakes and creates a safe and healthy environment for all guests, so we can have fun at the Entertainment Capital of LA once again.

For more information on how to stay healthy during this time, you can always visit the CDC website for all questions.