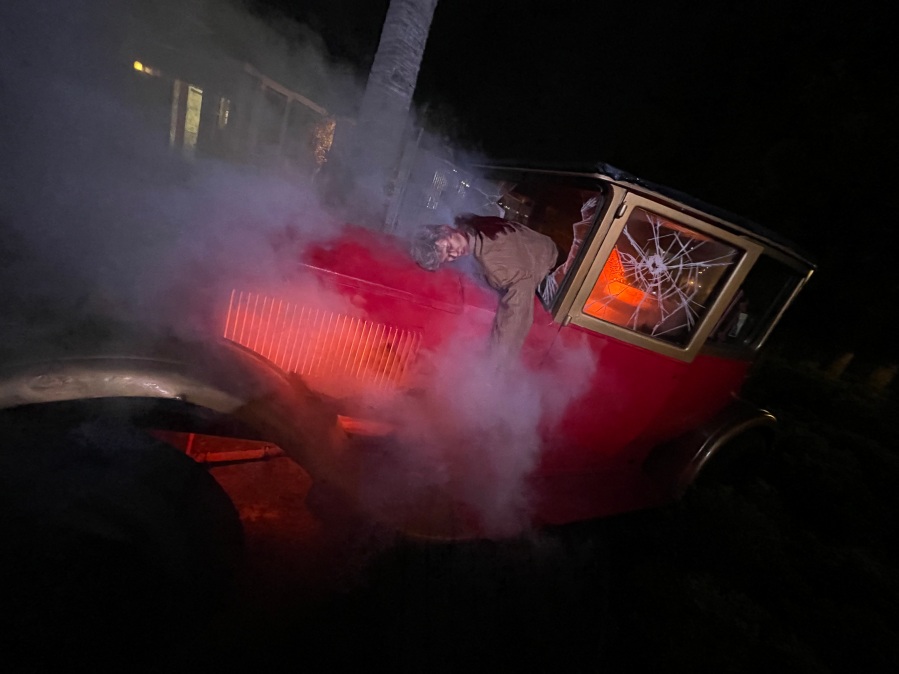 This past week, we were lucky enough to be invited out to Knott’s Berry Farm to have a sneak peak at what’s in store for Scary Farm 2021! Since we didn’t have Scary Farm in 2020, the demand for this event has got to be sky high. Even with the Taste of Fall-o-ween event that (at-least for us) tided us over till this year.

We entered the park after hours when the park was quiet and got our first glimpses of Scary Farm. We walked through the BRAND NEW scarezone for 2021…THE GORE-ING 20’s! Although it didn’t have scare actors/monsters, it did have the music, fog, and props.

One thing that immediately stood out was the soundscape. Unlike other scare zones where music is really prominent, the soundscape here is more subtle. It reminded us the music played in the Tower of Terror lobby. Slow, soft and ethereal. It’s really quiet haunting. Knott’s also added some large props throughout the zone as well. If you’re entering from the side with Pony Express, you’ll be greeted by a crashed vehicle with smoke erupting from the engine. There is also a very unlucky person who wasn’t wearing their seatbelt during the crash as well.

Further down the street, you’ll see structures made out to look like a news stand, fruit stand, and flower stand. They don’t have any “boo holes” in them, which leads me to suspect they might be part of something bigger for the scare zone. Something similar to how they have the funeral procession in Forsaken Lake.

Not only that, but we also got a sneak peek at the costumes the monsters will be wearing in this new zone with Bill Meier, Supervisor of Wardrobe Services at Knott’s Berry Farm. He described the clothing at gorgeous, which we agree with tremendously. Unlike most of the scare zones, Gore-ing 20’s is going to have some stunning costume designs. The only other scare zone we can compare it to would be Forsaken Lake because of it’s grandeur. But Gore-ing 20’s is going to me much more elegant in it’s presentation as well. There were also two costumes from the new maze Mesmer, which they seemed more tight lipped about!

We had a chance to chat with Eric Nix, Producer at Knott’s Berry Farm where he let us in on some exciting new things coming to Scary Farm this year! Have a listen below!

As we’ve said in previous reviews and coverage of Knott’s Berry Farm in the past; the food program as seen a massive improvement over the years. Stepping up from just traditional burgers to one of a kind experiences you can only get at The Farm. Scary Farm 2021 is no different and I would dare to say is some of the most imaginative and fun foods they’ve ever concocted.

We spoke with Laura Brubaker, the Vice President of Food and Beverage at Knott’s Berry Farm about the process behind creating all the amazing and delectable treats for Spooky Farm and Scary Farm! You can listen to that interview here!

Clearly they like having fun when creating the foods and it shows. Not only are they fun but they are tasty. We were able to try a handful of these items you can find at Scary Farm and here are our favorites!

Aside from any of the day or night entertainment offerings, food is going to be high up on our “MUST DO” list at Scary Farm for 2021!

Lastly, we have the merchandise! Every year there always seems to be that one piece of merch that we can’t go without. Sometimes it’s a shirt, sometimes its a pin, or even art. But this year, my wallet is going to be so angry at me because there is so much I want.

It seems that Knott’s has really stepped it up and created so much more merch around mazes and scare zones this year. We actually spoke with Karl Busche about all the exciting pieces at Scary Farm this year, and you can listen to that here!

The amount of merch for this year is rather overwhelming. We highly suggest taking some time on your next visit to really look at it all because some of them are beyond cool. Especially if you’re a Scary Farm nerd like myself. Hands down our favorite piece has to be the water bottles and stickers. Yes, it’s cool to get coffee mugs and tumblrs with the old school Scary Farm design on them. But there’s something so awesome about being able to “design” your own Scary Farm bottle. Not only is it officially licensed, but you also get to put your own personal spin on it. We purchased one of these fast and love it. The quality of the bottle is fantastic and isn’t one of those cheap bottles that will break in a week.

It feels like the people working at Knott’s are equally, if not more, excited for Scary Farm 2021 than we are! With every passing year, it seems like they are listening to what the fans want more and more and for us that really helps set them above the rest. Seeing the direct response to guests and fans requests isn’t something you see everyday when it comes to big events like Scary Farm.

We are so thankful we got to take a sneak peek into Scary Farm 2021 and opening night cannot get here fast enough! Start planning now, because it seems like Scary Farm is going to be a multiple night event!

If you’re interested in purchasing tickets for Knott’s Scary Farm, head on over to Knotts.com for all the different ticket options.

One thought on “SNEAK PEEK AT KNOTT’S SCARY FARM 2021”