Featuring More Mazes than Ever, “Halloween Horror Nights” Begins on Friday, September 15 and Continues on Select Nights through Saturday, November 4, 2017 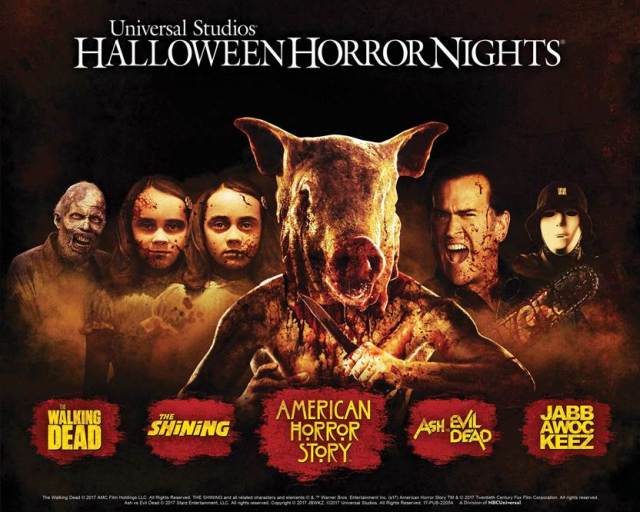 If you want to be dropped in the middle of your favorite horror movie, Halloween Horror Nights Hollywood is the only destination for you! From the sick creative minds of John Murdy and Chris Williams comes some of the scariest characters that have graced the silver screen COME TO LIFE at this incredibly terrifying event! You’re no longer just watching the movie, you’re in it! Do not hesitate and buy your tickets today! Below are the scary details of Halloween Horror Nights Hollywood 2017! Find out about how The Shining will haunt you or how Ash might save you from Deadites in Ash vs Evil Dead!

Tickets are now on sale for “Halloween Horror Nights” at Universal Studios Hollywood, Southern California’s most extreme and intensely immersive Halloween event, which kicks off on Friday, September 15 and continues on select nights through Saturday, November 4, 2017.

Tickets can be purchased at www.HalloweenHorrorNights.com/Hollywood, and advance purchase is recommended as event nights will sell out for all ticket options, including the all-new R.I.P. Tour, the After 2 p.m. Day/Night Combo Ticket, the Frequent Fear Pass, and must-have Front-of-Line ticket.

The new R.I.P. Tour invites guests in groups of up to 14 to scare in style with an exclusive VIP guide that also includes unlimited front-of-line privileges to all mazes and attractions, as well as a gourmet buffet dinner, drinks and valet parking.

Guests electing to purchase the After 2 p.m. Day/Night Combo Ticket can enjoy the park’s popular daytime attractions such as “The Wizarding World of Harry Potter,” “Despicable Me Minion Mayhem” and “Fast and Furious—Supercharged” on the world-famous Studio Tour by day, then step into the mazes and attractions located throughout the park to experience the terror of “Halloween Horror Nights” for one admission price.

The ever popular Frequent Fear Pass allows fans, who just can’t get enough of “Halloween Horror Nights,” to visit multiple times throughout the run of the event.

“Halloween Horror Nights” brings together the sickest minds in horror to immerse guests in a living, breathing, three-dimensional world of terror inspired by TV and film’s most compelling horror properties. Following is a partial list of this year’s terrifying line-up, with more maze news to be announced soon: