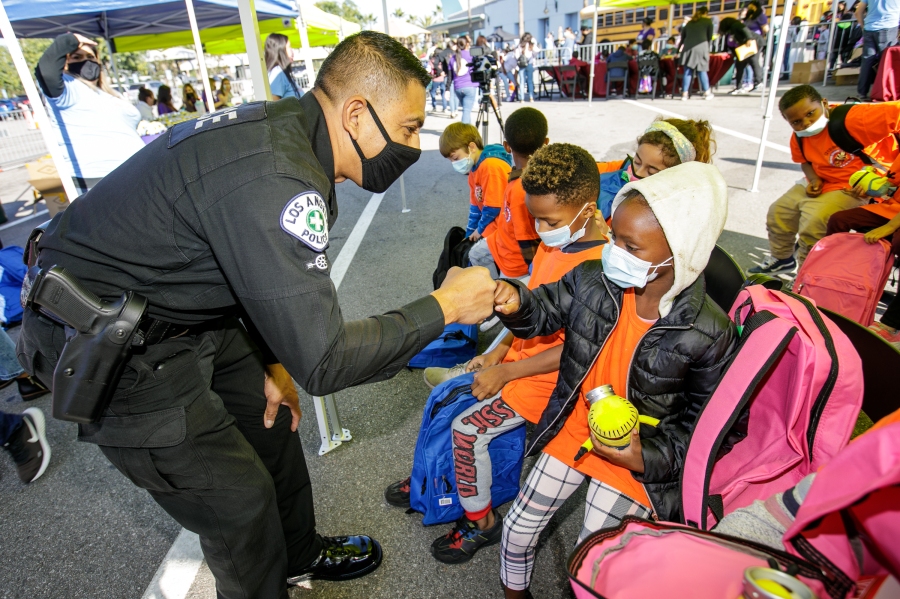 On November 9th, Universal held their annual “Day of Giving” event in front of Universal Studios Hollywood. Universal teamed up with Operation School Bell to give over 300 homeless school children shoes, backpacks, toys and more. If you haven’t heard of Operation School Bell, they provide more than 6,700 underserved elementary-age school children in LA Unified School District (LAUSD) with new school clothes, enhancing their self-esteem and chance to succeed. In addition to ordering, preparing, and organizing the shoes, clothing, and other items, OSB fundraise to purchase these items. OSB member volunteers contribute more than 25,000 service hours annually to make all this happen! They work one-on-one with the children, making sure that the clothing fits well and that each child feels valued and special.

The inspirational “Day of Giving” event is a yearly Universal Studios Hollywood tradition designed to connect employees with diverse community organizations, many of which are beneficiaries of the company’s in-house philanthropic organization, Discover A Star Foundation whose mission is to empower individuals and families to lead more productive and fulfilling lives. The day-long event will also support several other non-profit organizations across Los Angeles, including Covenant House, MEND Foodbank, The Foster Children’s Resource Center and Project Angel Food.

For many children, this may be their first time to get new clothes. The children are so excited that they often wear their new shoes and clothing back to school. The kids not only have new clothes to look forward to, but they also have a day of adventure ahead of them at Universal Studios Hollywood. Where they get to ride Secret Life of Pets: Off the Leash, experience The Wizarding World of Harry Potter, and hop aboard the World Famous Studio Tour! For many of these kids, they’ll not have had the opportunity to visit the parks in this capacity and it’s all about making them feel special.

Not only are the kids going to feel good in their new clothes, but they are going to stimulate their brains with the wide variety of book options. There was also an array of diverse books for children to choose from including books about Martin Luther King Jr., Greta Thunberg, Jackie Robinson, Paralympic Games and more.

Everybody knows that a full day at a theme park is a lot on your body. The walking, the heat and everything in between. So it was imperative that the children of the LAUSD received nutritional snacks and water before they got to go inside Universal Studios Hollywood for a day of fun.

Spending some time at the event really puts so much in perspective for us. Seeing the kids get excited about their new clothes and backpacks brought a tear to our eyes. It makes us re-think what we take for granted in our lives and maybe gives us a moment of realization. Even in our roughest moments, we are blessed in many ways. It’s phenomenal that USH teams up with so many different charitable foundations to make a difference to the kids of SoCal.