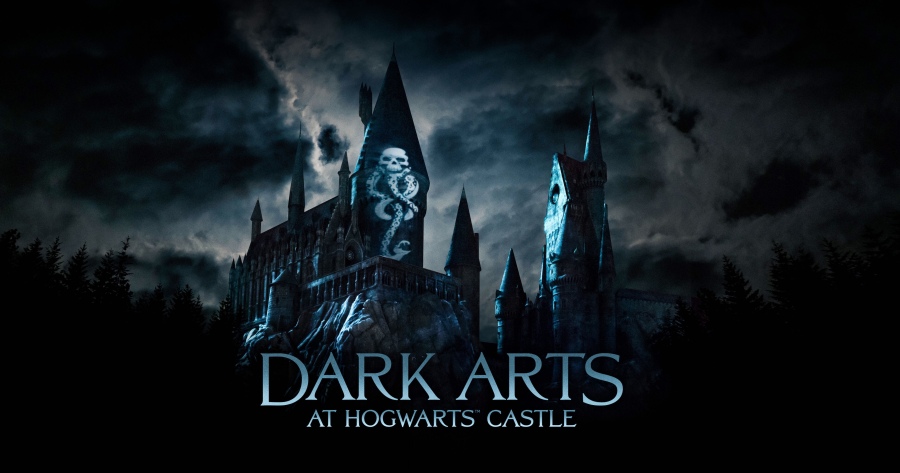 A Powerful Dark Arts Spell Has Been Cast on “The Wizarding World of Harry Potter,” Bringing a Dynamic, All-New Light Projection Experience to USH and UOR 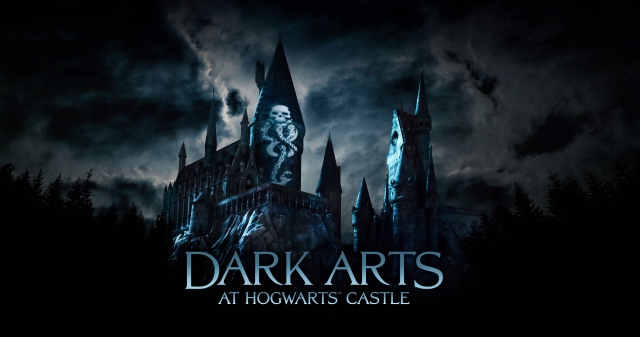 As fans of the film franchise and the book series, we love seeing the world of Harry Potter come to life in different ways at Universal Studios parks. Whether that’s having a ride on Forbidden Journey, escaping Gringotts Banks or just strolling around the land soaking in the magic. But if you are familiar with the books or films, you know well that not everything in the Wizarding World is good. There are monsters, Wizards and Witches that summon the power of the dark arts to help them fulfill their dastardly dreams or even help…he who shall not be mentioned. Now at the Wizarding World at both Universal Studios Hollywood and the Universal Orlando Resort, the Dark Arts will come alive with an ALL NEW nighttime light show projected onto Hogwarts Castle. Below are all the details regarding the new show.

The Wizarding World of Harry Potter just got a bit more sinister.

Universal Studios Hollywood and Universal Orlando Resort invite guests to experience an exciting new dimension of sorcery at “The Wizarding World of Harry PotterTM” with the introduction of the “Dark Arts at Hogwarts Castle,” a powerful, original and breathtaking projection experience. The “Dark Arts at Hogwarts Castle” will illuminate Hogwarts castle and “The Wizarding World of Harry Potter” nightly from April 13 – 28 at Universal Studios Hollywood then return from May 25 – 27.

Universal Orlando Resort’s experience will debut later this year with dates to be announced at a later time.

Guests will be asked to summon their inner strength and bravery in the face of the all-consuming Dark Arts as some of the awe-inspiring moments and creatures inspired by the films come to life within the majestic light display. As darkness falls on Hogwarts castle, Dementors™, Death Eaters and other unspeakable creatures from Aragog and Mountain Trolls to Thestrals will cloak the castle with sinister images from the darker side of magic—even conjuring the visage of Lord Voldemort™ himself, until the Patronus spell—one of the most famous, difficult and powerful defense of the Dark Arts charms in the wizarding world—is cast.

The “Dark Arts at Hogwarts Castle” will be accompanied by an exclusive musical arrangement that will emanate in a surround sound environment. It was conducted by prolific arranger William Ross and recorded by the London Symphony Orchestra in London, based on the original scores composed for the film series created by Academy Award®-winning composer John Williams. Inspired by J.K. Rowling’s compelling stories and characters that were brought to life in the Warner Bros. films, “The Wizarding World of Harry Potter” at Universal Studios Hollywood and Universal Orlando Resort is a masterful recreation, faithful to the visual landscape of the fiction and films, including as its iconic focal point, Hogwarts castle. From its snow-capped roofs and cobblestone streets to the historic British sensibilities that characterize the whimsical look and feel of the land, “The Wizarding World of Harry Potter” transports guests of all ages to the very places they watched on the silver screen.

With so much to see and do at Universal Studios Hollywood, the all-new 2019 Season Pass invites guests to experience the fun throughout the year for $149 when purchased online. Blackout dates and restrictions apply. Visit www.UniversalStudiosHollywood.com for more details.  At Universal Orlando, guests can take advantage of an unprecedented offer featuring up to six months free on any Universal Orlando Annual Pass if purchased before April 4, 2019.Click here for more details about Annual and Seasonal Pass options.